This just happened.
So, I’m upstairs reading Stephen King’s Revival, a novel about magic electricity. A storm has been brewing outside. My dog gets nervous and hops off the bed. I follow him downstairs and there is a pounding on the front door. I open it and there is police officer standing, “Did you dial 911?” I told him I hadn’t. Apparently, my landline called the police all by itself.
He checked my ID, and left me alone.

I called my wife at work and she said she had tried to call me before the incident but just heard static on the line.

Question: Is it one of the following:
glitch, phone freaks, or ghosts?

Duh. You obviously created a portal of narrative setting between your world and the world of the book you were reading, and some of the magic electricity leaked through.

Don’t get too freaked out; it happens to King himself, and he got the worse end of it. He got hit by a car out of a book he had been putting off writing.

Have you checked all your closets?

I have had this happen at three workplaces, now. Just random 911 calls from phones no one was using.

At the second one, it was after hours and only me and the IT guy were there. The cop was confused when we asked him “which number?” Because he assumed that it would be a central number. I have never seen a cop so gleeful when we informed him that, no, each line had its own number.

At the third workplace, it was the desk next to mine. The person wasn’t there that day and no one went into their cubicle. Then came the one from the same building, but a locked and empty suite.

I am very familiar with this phenomenon. It tends to happen on days when I am overworked and overstressed. Inclement weather not required.

I am very familiar with this phenomenon. It tends to happen on days when I am overworked and overstressed.

If you’re unintentionally, psychically dialling 911, I think your subconscious is trying to tell you something.

It’s one of your Internet Of Shit appliances. The other IoS appliances in your house are conspiring to murder you in your sleep, except for the one that ratted them out to the cops.

Were you perhaps watching something on your VCR?

Data Point 1: We use VOIP phones at most of our offices.

Data Point 2: Many Users use a soft-phone on their PC to dial from their work number when not at work.

Data Point 3: You must dial 9 for an outside line.

So user in Hotel in Outer Florgolia, fires up the softphone, types in 9 & 1 and then pastes the number from the online directory, ending up with…

Someone pranking the number with a standard 911 call? At least it wasn’t a random swatting.

Apparently, my landline called the police

Do you use your landline much? It might’ve been bored and a bit senile and thought it was calling a 976 number.

I mean, that’s certainly better than some of the alternatives…

Since all the good silly replies have already been made, I’ll just play it straight and say it sounds like a case of crossed wires… or whatever signals landlines use to connect to digital communications these days.

I live in an apartment with no landline and one day some cops showed up for a mystery 911 call.

I answer the door in my pajamas and uncombed purple hair, I tell them I have no landline, I confirm I’m in the apartment alone, I can’t remember my cell number off hand but they buy it when I say it’s fairly new and I use it almost exclusively to text my boyfriend.

They ask to search the place and I politely decline, step outside and close the door. My partner had a med card for his weed and nothing in the apartment was illegal, but I never consent to searchs.

I’m shaking at this point but I’ve got on my best innocent and helpful face, I’ve got serious social anxiety.

The cop talking is a short black woman, there were one or two others I can’t remember at all. I was locked on her face, but I think the one she talked to was a guy. She eventually sized up the situation and decided it was a false alarm and left.

I was scared of the front door for days.

Holy fuck. Sounds like they just needed some excuse to violate your 4th Amendment rights.

This is timely (frequency illusion?)… I had to call 911 for real this morning (although it turned out to be a false alarm).

So, I am rudely awoken two hours before I’m supposed to be, by a repeated beeping. It takes a minute for me to become aware enough to figure out that it’s coming from my combination CO/natural gas detector; the beeps are one long rather than four short, indicating a gas leak.

The alarm stops beeping when I open my bedroom door and let air circulate. Still, discretion is the better part of valour, so I grab my phone, GTFO, and call 911 (like the instructions for the alarm, which I’ve grabbed on the way out the door, tell me to).

Fire truck comes, they sweep the house, find nothing, and tell me that I probably have a faulty alarm. Which, you know, is the preferable result at this point, but better still would have been not to have been woken up at quarter-to-five for no damned good reason.

I hope I’m not going back to the days when electronics would just randomly go on the fritz for me. Those days were annoying. Based on the behaviour of my autocorrect this morning, though, I’m not hopeful.

I remember hearing one faint beep in the house every now and then a few years ago. It went on for days, because I thought I’d heard it in one room but I’d have to wait a while for the next faint beep which was always elsewhere. After a week or two I finally tracked it down, to a smoke alarm sitting in a box in the basement, taken down when we got a room painted, forgotten and replaced with a new one. It was asking for a new battery.

I’ve had two of those recently, as well. One was a smoke alarm, and it just needed a new battery, so that was fine once I sorted it out (although it beeped every five minutes, making it especially hard to track down). The other was a CO alarm (I have, like fifteen of them in my house, because I brought my own when I moved from the old place, and the old owners left theirs), so I went out, bought the exact batteries it asked for, and I replaced them… and it kept beeping. I guess it’s reached end-of-life. As I said, I have a surplus of CO detectors, so I just took it off the wall and didn’t bother replacing it. 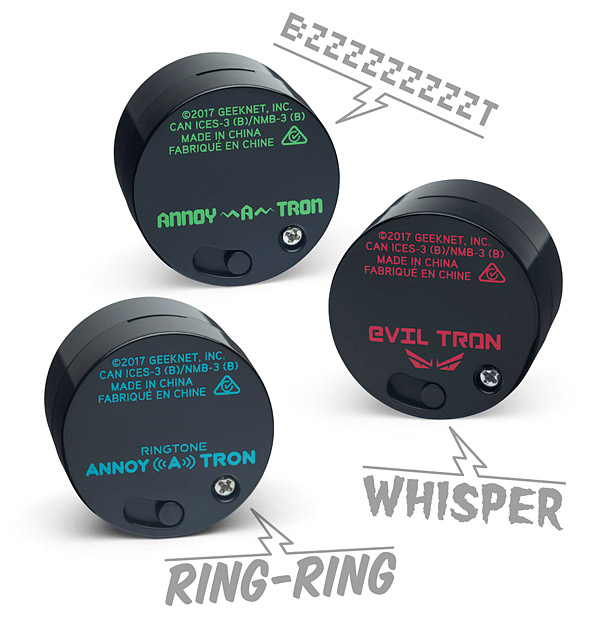 Cry havoc and let loose the pranks of war in your office with our Annoy-a-tron Prankster Pack. Let us help you in your mischief making! The bundle includes the ThinkGeek Annoy-a-tron, Ringtone Annoy-a-tron, & Eviltron.

Aren’t these at least borderline illegal? They can be considered a bomb threat in certain contexts.