Guild Wars 2 is supposedly a massively multiplayer role playing game, but really, it’s a character creator with some farming aspects attached. The character creation options are so deep, I spent an hour designing my first character - picking their wardrobe, tweaking their face…

Ostensibly, there are five different character storylines - one for each race. The story for Humans is pretty decent- lots of intrigue, mystery, politicking - but the real draw is socializing. Just farming NPCs for crafting materials is downright fun.

Guild Wars 2 is free to play. Get it here: https://www.guildwars2.com/en/

I played it when it was new-ish. Ran a few characters up to max level and finished the storyline with one (getting to the point where the storyline merged into one thing regardless of race & order) and then kind of got bored. I never did dungeons, instances etc. but enjoyed getting in on the big quasi-spontaneous boss battles and regularly occuring events with whoever else happened to be in the area.

Several months later I came back and did it again, and then there was the expansion and I came back again – starting over each time because of mechanics changes and forgetting most of what I’d learned.

I finally uninstalled it from my hard drive just a few weeks ago, but I’m not ruling out playing it again sometime in the future.

I like all the races except the Charr, who have the screwiest capital city in terms of graphics card meltdown and physical layout, and whose run animation is just weird. For classes I liked pretty much all of them except the Warrior and Ranger.

Reached the end-game after around 80 hours(!) Random images below.

I went ahead and pre-ordered the new expansion, Path of Fire - which adds rideable mounts. In the previous expansion -Heart of Thorns - you get the ability to glide (after level 80, natch). It’s unfortunate that the fun bits of movement are locked away from the free-to-players. 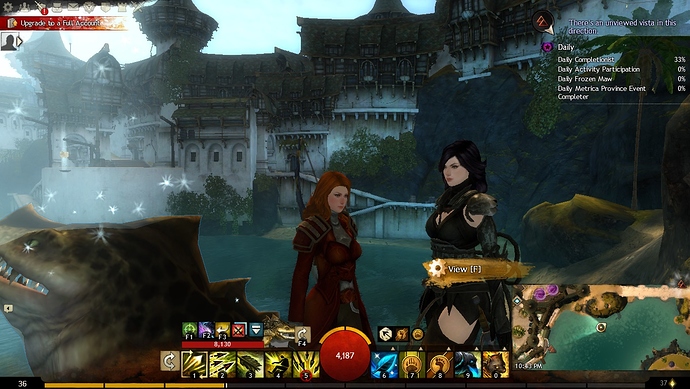 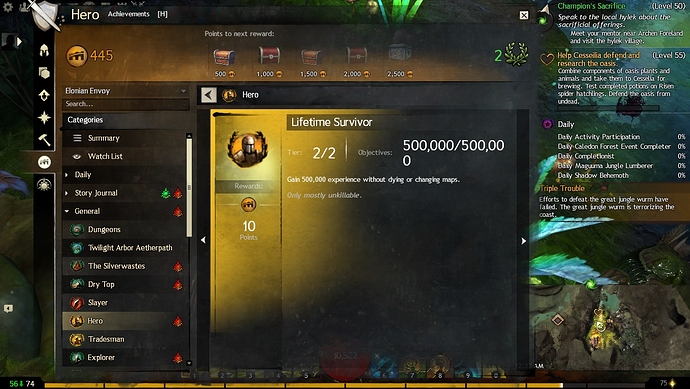 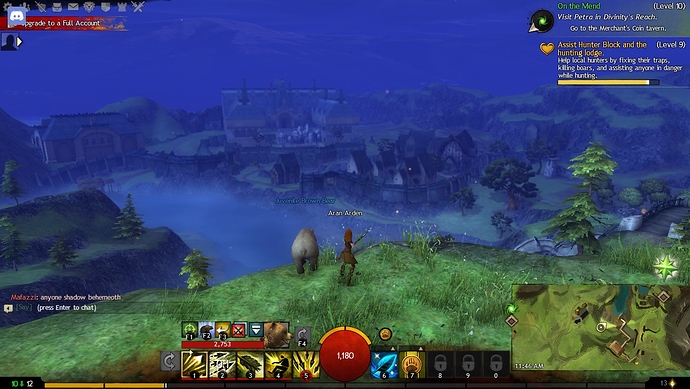 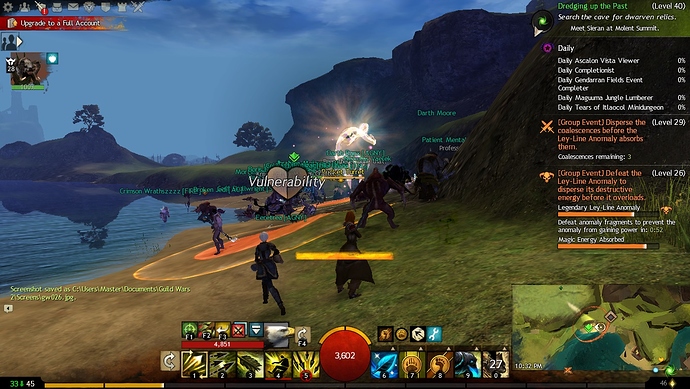 I’m coming to the end of my DDO sub and am looking for a new MMO to be your whale in. I was planning on doing FF14 but I found you’ll hit a few story walls unless you team up.

How is it for a soloist who doesn’t exactly dislike teaming up but would rather not since viddyah games are how they escape from humanity?

The story mode can be solo’d entirely. Some of the side dungeons will require you to squad up. When running about, there are often mini-events like the Bloodstone Bosses - those tend to attract a lot of players who’ll just show up and then leave when it’s over.

The nice part of the game is that with so many players on, somebody will bail you out if you get in over your head.

hose tend to attract a lot of players who’ll just show up and then leave when it’s over.

That’s one of the best things about the game, IMHO. The other is the visual style (minus some of the ridiculous outfits for women).

Gave it a shot. Not too bad so far. A bit easy going though I suspect that wont last once I’m out of the starter zones. I’ll probably give all the classes a bit of a run through the tutorial to see how their feel is before settling on one to play with.

I’m liking the gothic lolita fern lady despite her having the range and vitality of an old man with a cane.

If you’re on an F2P account, I can send your character some equipment (Oils, foods, armor runes, sigils). It’ll help you a lot in boss fights.

Thanks. We’ll see how things go once I find something I’m feeling.

Finally settled upon an Engineer with dual pistols and turrets as my main. It seemed to best match my playstyle. Almost level 20. Just finished the Queensdale map and I think I’m about to get My Story 2. Still fishing for an alt. I’ve yet to give Mesmer and Theif a try.

Overall I’ll probably be playing for a few months for sure. While the different backgrounds during character creation do seem to give you replay value in your personal story quests, I’m not sure if the landscape content is compelling enough to make seeing them all worthwhile.

Elementalists are a weird class. I never really got the hang of them.

Necromancers are pretty great for soloing (…or at least, they were last time I played, it’s possible everything is totally different now).

Mesmers crank up the weird and pretty factors another few notches.

The Engineer is a verra goot DPS class with access to heavy weapons like a… flamethrower? Essentially a slower but deadlier Ranger/Hunter/whateveritscalled. The engie’s also one of the few classes with a summon/companion, which is nice for soloing areas.

As you level up, you’ll be able to access more (H)ero abilities - they occupy the slots on the right half of the split. The class I play has a bunch of sub-classes defined by passive abilities (Signet skills) and Build passives. Acquiring gear sets (with matching runes) is much easier on a paid account than a free one since you can outright buy it from other players (via trading post). The killstreak sigils and Mercy runes are very nice indeed.

I’m looking forward to playing through the expansion for those shiny mounts and Elite Specializations. I wouldn’t recommend buying both expansion to anybody but the most committed.

Elementalists are a weird class. I never really got the hang of them.

Enough people are playing them that I’m pretty sure it’s just me not being able to kite worth a damn.

As you level up, you’ll be able to access more (H)ero abilities - they occupy the slots on the right half of the split.

Right now I have all turrets on the right. Healing, flamethrower and something that acts more like a cannon than a gun. To be honest, between them I’ve had little need to visit the F keys.

Though I did have my first defeat at the hands of some guy near the dam with two adds in a small space surrounded by drakes. The AoE attacks and just rolling around drew aggro from the drakes and even with the turrets and heals, 5 on 1 meant that I got pasted.

The Engineer is a verra goot DPS class

I did the quest where you protect the queen from the undead. The turrets and mortar had them all dead in the first five seconds. If only the landscape critters went down that fast.

So after hitting level 40 I decided to delete the engineer and start again with a warrior. I found I was dropping turrets constantly while retreating because it was becoming impossible to lure mobs out one by one and dispose of them. (Just due to landscape placement and the indiscriminate nature of the AoE attacks) I’ve gotten too old for twitch-based game play and between the kiting and rolling and tabbing and buttons I found I couldn’t really keep up at the mid levels. I feared what the high levels would bring.

However grenades under water is pretty great.

I am hating how the game handles tab targeting, grabbing things off screen I’m not preparing for or grabbing something behind my intended target. It can be pretty frustrating and I haven’t found anything in the menu to fix it.

Depending upon how well stealth works I might give a thief a shot as my alt. But I’ve yet to play an MMO where the stealth mechanic was worth a damn so maybe?

IIRC, the stealth mechanic in this consists of giving more crits and giving teleporter attacks.

I wanna Solid Snake some centaurs.

ETA: I know the advice for warrior is ax/mace but I find the maul very satisfying sounding.

After a lot of screwing around, and buying a full account because I can easily afford it, I’ve settled on a Sylvari Elementalist, Asura Revenant, and a Human Ranger. They’re all at level 19.

The Ranger is definitely the easiest to play. I’ve stuck with ax/dagger for ranged and tight spaces and sword/horn for melee that allows for all that flipping around without sending me into danger. If I have a good bow I’ll use that and bear tank because fuck the hardcores, I’ll play any damned way I want. So far the drake and spider seem to be the best for combat but I run with the dog because it looks like Scooby Do. No faceplants yet.

The Revenant has a lot of interesting combat mechanics, but with all the hopping around it is crazy easy to draw aggro you can’t really handle. This has caused me to faceplant once. I’m pretty unimpressed with the legendary figures so far and have stuck with the dwarf. Mace/sword because the mobs can’t seem to walk out of the aoe of the mace. But I prefer ranged combat so I might drop this class for later playing and focus on the other two. Or go back to the Engineer for a second alt.

I finally got a handle on the Elementalist. Drop a lot of fire and dodge. Preferably while dropping more fire, so the staff is a must. I have faceplanted a few times in crowded areas because they don’t give you a lot of room to move without drawing aggro. While they can drop trash mobs quickly, the fast respawns coupled with the durability of veteran and boss enemies means you can get hit from behind at the worst times.

Other things I’ve learned: Hunting hero points can get you up a few levels just by opening waypoints and discovering neighborhoods. Grabbing the easy vistas and p.o.i. as you do it also helps. And it’s better to save the hero points for what you’re focusing on than try to get everything filled as you level.

Yeh. I hit level 80 a fornight or two ago as a Hunter. With the right sigils and runes, you can build your character into a critspammer - or in my case, a combat medic.

Remember to spam edibles and oils.