I know it's Texas, but why are people not more freaked out about this?

We need a category for horror. For things like this:

This is horrifying. Why is there not more screaming about this? Is it because it’s Texas?

It’s pretty outrageous that there would be any religious test for adoption - frankly I’m shocked that it would be legal at all.

frankly I’m shocked that it would be legal at all.

Sounds like something that will end up at the supreme court. What utter bullshit.

Yeh, the ACLU will destroy this when push comes to shove. It’s so clearly unconstitutional that it won’t survive even the barest legal scrutiny.

I have to wonder, though, whether the increase in clearly-stupid bullshit like this is part of a wider effort to shore up Republican support for undermining the judiciary and/or the press.

Anyone can see that this won’t stand up in court, so the obvious question is “why bother?” It seems to me that the goal isn’t “create laws for America” but “create conservative talking points” and that worries me.

“We could have Made America Great Again but that damned judiciary and that radical press stopped it from happening. Therefore, we need to limit freedom of the press and reduce the power of the judiciary.” That seems like a pretty straightforward path to fascism, from where I’m sitting…

You hear the term islamofascism, but christofascism is a term that needs to get out there more. That’s the flavor of fascism that we’re going to have shoved down our throats if we don’t pull our collective head out of our collective ass and shut this bullshit down.

I have to wonder, though, whether the increase in clearly stupid bullshit like this is part of a wider effort to shore up Republican support for undermining the judiciary and/or the press.

My guess is that is partially it. Some people are probably thinking on that level of strategy. But I also think some just see trump as their chance to do things the way they want to. “The right way” and don’t see it doomed to fail. Many I think are just the political counterpart to all the white individuals freaking out on video that trump won so they should get their coffee faster now. it doesn’t make any sense to us but it seems to for them.

I guess you’re right. Never attribute to malice that which can be explained by outright stupidity…

ETA: …and/or ideology that overrides all human decency.

although kennedy will probably be opposed to this law, given the promotion of gorsuch to the supreme bench and the quality of any further appointees by 45, it is quite possible that this law may pass the supreme court by the time it gets there.

I’m startled by the fact that the US press corps didn’t have access today at the White House, while the Russians did.

That did happen, right? I’m half-serious…with all that happens and all that’s reported to have happened…siiiiiiiighhh

Anyone can see that this won’t stand up in court, so the obvious question is “why bother?”

To drain state coffers fighting dumbass law suits, enabling further cuts to services in the name of “balancing the budget.”

“These are our requirements, and we’re clear, this is just who we are,” said Daniels.

That’s who YOU are, perhaps. Do these same agencies place only self-professed Christian children? Is anybody asking them if they prefer to be placed by a Christian agency to a Christian home? 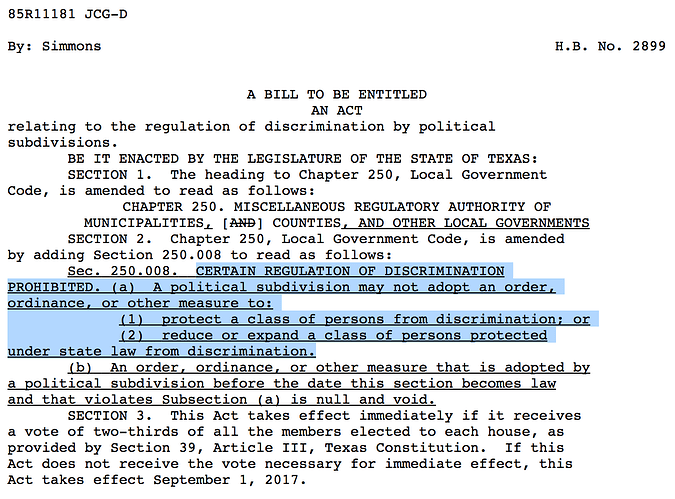 I think this thread’s title could make it a continuing storehouse of such Texan B.S. over the newxt few years…

It seems to me that the goal isn’t “create laws for America” but “create conservative talking points” and that worries me.

The GOP has been passing unconstitutional laws on the state level for a generation. Some states pass the same unconstitutional laws more than once (looking at Lansing, MI sideways). You’ve pretty much nailed it, it’s all about appeasing the wedge-issue voter and generating talking points.

It’s not just about talking points, it’s about covering up the profiteering and self-interest that leads to something like the Flint water crisis (to keep it in Lansing). Now the public debate come reelection is about pederast predators in dresses forcing their way into the bathroom to convert the good Christian children to sluts, and how liberals want to erode the moral fabric of the country; instead of how fucked we all are.

I’m pretty sure even without the law this has been a huge problem on a national level. Many agencies will only accept straight Christian parents, and then past that don’t care.

Pretty much it right there. The progressives in that state don’t seem to have a voice thanks to the “Christians” running the shit show down there. So laws like this get passed and the rest of the civilized world (not the US!) goes “WTF?!?”

Yeh, the ACLU will destroy this when push comes to shove. It’s so clearly unconstitutional that it won’t survive even the barest legal scrutiny.

But they keep doing it because they are betting that 45 and TGOP will pack the Supremes in such a way that any “Christian” law will be made legal.

christofascism is a term that needs to get out there more

The Handmaid’s Tale is pretty much the US if the “Christians” get their way.

We should be screaming about it… but I also think that it will be challenged in court and they’ll lose if it goes up to the supremes. There is no way it can stand on constitutional grounds. [quote=“waetherman, post:2, topic:332”]
frankly I’m shocked that it would be legal at all.
[/quote]

It really isn’t. It clearly violates the first amendment, obviously so.

[ETA] A point which several folks beat me to!

Yeah it seems this is a new trend, not yet tested in the courts. But I wonder if there’s an argument to be made by using outside agencies that may have their own criteria, and use some kind of “religious freedom” exemption like so many have recently, like with Obamacare.

There’s no “religious freedom” when tax dollars are in play. That’s the second reason this Texas law is unconstitutional, it violates the establishment clause. The first reason is that the law violates the freedom of religion conferred upon the people seeking to adopt. With tax dollars involved, there’s also a violation of the 14th amendment, as non-“Christian” couples are being treated differently than “Christian” couples under this law. That’s not even touching the discrimination against a couple comprised of two women or two men.

A canny lawyer would probably take the 14th angle.

Money quote from the article:

They should be terrified, they’re violating the rights of couples seeking to adopt kids. What’s more, they should be ashamed of themselves for turning down possible adoptive parents for dubious and discriminatory reasons when there are apparently 3,800 kids in need of new, permanent homes in Texas.

Thank you for goatsplaining that. I’m a lawyer too, so I get the legal issues. But what we’ve seen over the last few years, mostly in the planning stage but also in some court cases, is this idea that religious freedoms can be exercised in some ways previously thought to be completely unconstitutional. Take school vouchers, for instance. The idea of using state education money to fund religious schools was anathema to our constitution just a few years ago. Now it’s common practice.

So to the extent that adoptions might be handled through third party adoption agencies, even if they work with the state or are even funded in whole or in part by state funds, I can see there being some big carve-outs for religious discrimination. And I’ll be this Randy Daniels character isn’t terrified at all. I’ll bet he’s praying his little heart out that he discriminate legally so he can turn away all those muslims and athiests who try to adopt from him and raise heathen children.