I felt it was time to give everyone a heads up in what’s going on with me and an obvious life change that seems to have occurred recently.

I’m becoming diligent in keeping my little room clean, showering most days, keeping up with errands, etc., but most of all, I’m painting regularly.

So, now that I’ve brought that up, I really wish to make apologies for the time it’s taken to finish artwork for some of you.
If anyone were to ask me why it’s taken so long to get past the depression, I suppose I could point to the health problems (as well as the time I almost suffocated because a dud Advair disc wasn’t working). However, if anyone were to ask me what is different now, my answer would be “I DON’T KNOW!”
Either way, something’s working, and I’m not gonna screw around with it.

Right now, the problems are still the same…100 bucks rent due today, no food, no more drinking water, need to mail artwork, etc., but somehow I’m still painting and not retreating to my bed.

I’m close to finishing your stuff. I’ve been having to weave some new orders in with older stuff to earn money to keep going, but I’m still catching up quickly.
I’ve also started a thread similar to @Wanderfound 's over at the other place, to show people what I’m doing, though I still need to go clean up and revive some of my social media accounts during October.
(The primary glaring one being my Instagram, but I have one client who is obviously pissed until I can send her the most PITA painting I’ve ever had to make for someone…)
The most surprising development of the past month has been an order from our fave villain, Jeff, which got me through September.

Still, @MarkDow, I needed to make some revisions now I have a clear head. I am working on it first, and should be finished by the weekend so long as I can pull together my urgent needs. I dearly hope it will be worth the wait.

@kxkvi next. This should not take long, perhaps Monday if not sooner.

@RatMan, I had started something when we first talked, but this definitely needed revision, and now I’m not even sure if you were wanting something bigger. I’ll PM you at the beginning of the week.
This will also be a priority, so it can get to you quickly.

@CleverEmi, we had spoken about something, but never decided on an image. We can talk soon.

Am I leaving anyone out? @ChickieD? @kathy.padilla?

I’m not in a hurry. Take care of yourself.

I’m so glad to hear that things have stayed better! I’ve been assuming so, and it’s good to know.

Good to hear some things get inexplicably better. I have had long stretches of difficulties followed by life getting better, and just the memory of that happening helps me in harder times. Sometimes just having some positive motivation is a great gift. No hurry, best wishes.

For those who don’t wish to go back to the other place, here’s one of my latest up for sale, and also in case you might know someone interested.

ETA: Just want to add that on the strength of this painting, and others I’ve started since the change, I think you’ll all be getting better product than when I was roller-coastering a year ago. 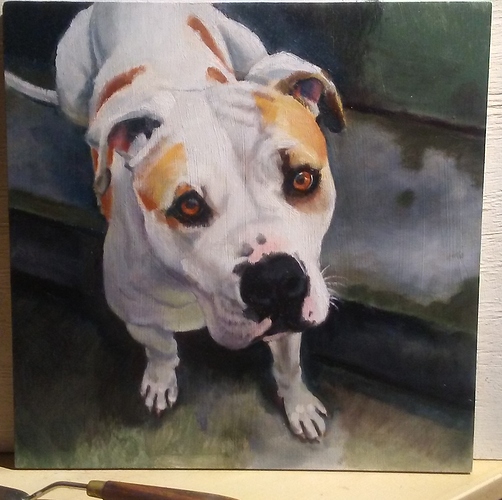 Well, if y’all need a place to stay, I still have one, should you decide to come to MI ever.

This will also be a priority, so it can get to you quickly.

No rush, take your time. Mark(@Traveler) is travelling and won’t be back that way for several weeks so nobody to get it for a while anyway.

I am? News to me. I’m home this week and next, then off to New Mexico for a couple of weeks.

I had a response from @RatMan about the doggo, but haven’t heard anything else yet. I figure he’s busy at work.
I’ll finish this painting up nonetheless, and wait to hear from one of you.

I had a response from @RatMan about the doggo, but haven’t heard anything else yet. I figure he’s busy at work.

I’m a “no” on the dog painting. I’m kind of waiting to see the one I commissioned before I buy anything else.

That’s fine. Should be shortly.

Hey guys, I’m just poking my head in because I’ve been a little scarce over here lately.

I was pretty stressed out trying to play catch-up, and got very sick (THE WORST head cold developed into both an intestinal bug and bronchitis), likely due to my lowered immunity on Prednisone.

Anyway, I’ve been working on revisions. One was a total do-over, and not easy, but now I’m in the home stretch with two easy fixes (@MarkDow and @kxkvi) and then I can consult with @CleverEmi and another person I’m trying to reconcile real name to avatar. Please contact me if you know this is you…

Meanwhile, I’m having a devil of a time in the Discourse/Disqus/whatever here since the Firefox reboot. It’s not as bad over at BoingBoing, but it’s not playing nice at all with my onscreen keyboard, and keeps crashing.
Streaming and other functions work fine, and Microsoft insists my display drivers are up-to-date, so I really can’t pinpoint why the driver keeps freezing or crashing the system. @tinoesroho? Any clue?

I hope you’re feeling better. Prednisone is a wonder and a curse.

I’m feeling better, and the hardest revisions are behind me, so my outlook is positive. No more trying to put too much into too small a painting.
New paint has arrived, which eases some anxiety.

However, my credit union failed to mail out my new debit card, and I haven’t been able to pay into my cards from Google or PayPal, so I’m waiting for them to go directly to my account instead. I’m down to a banana and some yogurt, and I think it’s going to come down to the wire…

And trying to link to my bank in Google Pay failed, so I’m looking at $250 sitting in my Google account, and no way to access it until they figure out why…or my debit card finally arrives (also a couple of days I think), whichever comes first.

I’ll have to use my trolley fare to buy food and then borrow to get the fare in a couple of days, I think.

That has to be the most frustrating thing, having money but not being able to get at it.

Nobody can even throw any more money at the problem either. It’s just a waiting game now.

But I have some brand new Ultramarine and Burnt Sienna, so I can still paint.

I think of it as lasting longer that way, lol.

I think Google won’t accept banking institution info until they have an actual card attached to your GooglePay account, so they can swipe money in disputes automatically, instead of having to request chargebacks from the banks. Does this sound correct/valid?

Google’s escalated the issue to a “specialist team”, so I guess we’ll see what happens…