I’ve been working late a lot recently so I’m at work late and going home late, and all the Uber drivers use Waze now so we’re driving down weird roads at weird times and I have felt somewhat “other” the past two weeks. Today seems fine, it seems to have all snapped back into place but I find myself thinking of liminal spaces. You know, those spoopy in-between places that feel just a little bit out of place.

Like walking the wrong way down a street you usually walk on. Everything is familiar and the same, but at the same time its all completely other.

Some of my faves:
Laundromats at night
Office buildings on the weekend
The reflection of the bathroom in an airplane mirror
Your childhood home
Playgrounds in the rain
Your living room when everyone else is upstairs
The 3 seconds of darkness when you turn out the hall light and walk to your bedroom door (that 3 seconds could be an eternity)

Something happened to me this morning. It’s different but related. You know how you see a common word and for some reason can’t parse it, it seems misspelled, but it isn’t, but it looks like you’ve never seen it before?
I was looking at online Spanish-to-English dictionaries and after spelling it and reading it several times, the word “Spanish” seemed to be some different word I couldn’t quite make sense of. But I knew that it was the word I’d been using and that it referred to Spain, it was the letters that would not parse. And then it went away.
Every once in a while, this happens to me. Oddest thing.

ou know how you see a common word and for some reason can’t parse it, it seems misspelled, but it isn’t

I’ve had that happen dozens of times! Very weird. I wonder if the information is taking a different route in the brain, as if arriving in consciousness from a weird angle. The brain interprets it as “new” when it isn’t. I’ve often wondered if this is how déjà vu works.

This morning, I had a common occurrence – I had my eyes briefly closed in the shower while washing my hair, and had the odd feeling the shower curtain and wall had swapped places. Dizzying.

Interesting. I know the feeling but I didn’t know what it was called.

I felt it strongly a couple of weeks ago when I was back in San Diego. My son and his kids have moved into our old house on the ranch, and a huge chunk of the ranch itself has been sectioned up into building lots. It’s home but not-home, almost the same but also distinctly different in some strange undefined way. I was actually happy to leave because it was making me feel uncomfortable. There’s a perfect quote from The Matrix: “It’s like a splinter in your mind.”

That sounds like semantic satiation. Puts a real damper on reading certain papers.

There is a corner in out little tiny town, that often gives me a bit of vertigo, a definite glitch in the matrix feeling, but only when I’m walking. It feels like I’ve been switched to an alternate timeline, but I can’t see what’s different. Not every time, but often enough that I try to walk around the block when I go to the post office, to make it feel more normal, or to switch me back to my own timeline.

A kitchen, pre renovation, with all surfaces clear of food, dishes or clutter.
Riding backwards in a limousine on a route you have driven many times before.
The living room after the Christmas tree has been taken down and put away, but before the furniture has been rearranged to account for its absence.
That last look through your apartment before you move out.

The explanation for the phenomenon is that, in the cortex, verbal repetition repeatedly arouses a specific neural pattern that corresponds to the meaning of the word. Rapid repetition makes both the peripheral sensorimotor activity and central neural activation fire repeatedly. This is known to cause reactive inhibition, hence a reduction in the intensity of the activity with each repetition.

Sounds right. Although I feel like I’ve experienced this feeling other times just in normal reading, where I wasn’t typing it and didn’t notice any repetition in reading; though I wouldn’t have known then to identify repetition as a cause, either.

Riding backwards in a limousine on a route you have driven many times before.

just gonna have to take your word for that one, Mr. High Roller ;^)

Things felt pretty liminal when I used to walk the train tracks at night, and some of the other spaces I would explore that would have been trespassing, had I been discovered.

Come to think of it, I get those feels during artmaking, and my art teachers said that correlated with right-brained thought–time slowing down and etc.

The office on a weekend.
At home when the power goes out and everything goes silent.
Away from the lights of the city on a crisp, clear night and you can see the stars curve above you.
The early morning of a freeze, the skeletal trees bone-white in the dawnlight.

Sometimes, when I’m in bed, I am certain that my head is actually at the foot of the bed, and therefore the room is rotated 180° from where it would normally be.

Your living room when everyone else is upstairs

I get the opposite of this… My house is almost always empty, so it doesn’t feel right when there are people in it.

Walking through a city, or on a major street, at that rare hour of the early morning still well before dawn when there is no traffic left and you may not see or hear anyone for the whole hour…or you may.

Going back to my hometown after many years away. The streets were mostly the same, the people spoke the same, the air smelled the same. But it was not the same. It was a simulation, or an emulator, slightly off in some key but unidentifiable way.

Those times when the moisture in the air and the angle of the sun are at just the right combination to cast an otherworldly tint (often green) on everything and change the shadows in some indescribable way.

The odd lowlight blue tint when everything is covered in snow, and sounds somehow simultaneously both carry long distances due to the cold air and at the same time are muffled and silenced by the snow and mist.

Back alleys and abandoned buildings in the daylight, when they’re not really spooky and yet, some haunting vestige of the night’s presence remains.

The early morning of a freeze, the skeletal trees bone-white in the dawnlight.

It’s not exactly what you wrote, but it made me think of this photo I took. 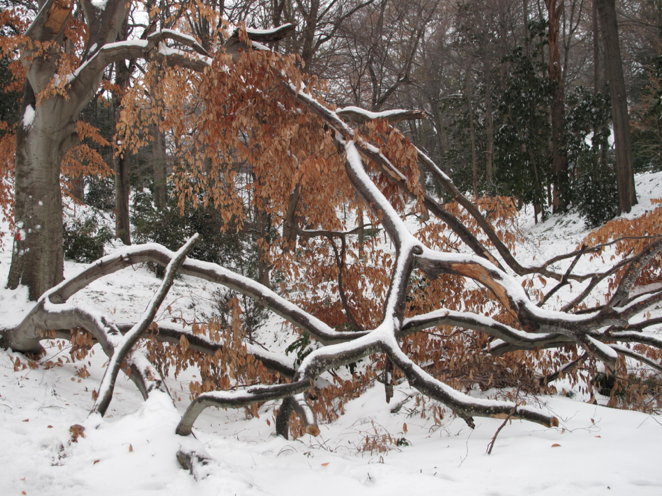 @DaakSyde your post makes me think of the Scorsese film After Hours.

For me it’s my office, even though I’ve worked there for nine years (and for the company for twelve). You can see the CN Tower and Lake Ontario from the staff lunchroom on a clear day, so sometimes I go there just to take a 5 minute break and look at home. I always wind up feeling a little bit homesick, even though I just left home that morning and will be going home that night.

Driving that curve where the QEW turns into the Gardiner and you get the first clear view of the Toronto skyline always reminds me of the line from LOTR, “The white towers of Ithilien, calling you home!” Silly but true.

Have I mentioned I hate commuting by car?

I love all of these!!

@noahdjango - new words! That blip into being! Like Dawn on Buffy! Shouldn’t be there, never were before, but now everyone knows the word. Totally happens all the damn time!

@kxkvi - sometimes before I wake up I know for certain that the bed is facing a different direction. But when I wake up its where it always has been. Stupid rotating beds!

@RatMan - home but not home, like in a dream, when I visit Nana’s house, I know it was torn down years ago, and we often talk about it, that its gone, and she gets sad and makes me a cup of tea.

@nothingfuture - taking the subway to see my dentist in the afternoon is entirely liminal.

@CleverEmi - basically all hotels but especially motels are liminal. Most especially the ice machines and vending machines at 2AM

@MalevolentPixy - highschools in summer too! And yes. Weather events are all liminal!

@nimelennar - YISS! EXACTLY! Rotating beds!! I think I mean more the feeling when say you’re at a party and everyone is in the next room and you’re in a room alone (usually petting the cat) - so is the room liminal or is the cat?

@DaakSyde - yes, all of this yes. There is a street in my childhood neighbourhood that we all avoided. No reason. But none of us ever went there. It was wrong. It did not quite belong. The adults didn’t get it, they’d walk straight down it, and never feel a thing. But all the kids knew.

@gadgetgirl - dawn on the cottage dock. The cottage is on an island. And in that moment the homesickness is so strong! LOL - I often feel like the island doesn’t want us there. It goes away as the sun rises. (turning into one of those adults I spoke of above)

New Orleans levee of the Mississippi in the early morning.
Ditto New Orleans City Park in the middle of the night.
My home right now - prepared to sell, nothing personal on the walls, newly painted. Doesn’t feel like my own space.
My head right in this moment in time where I feel like everything in my life is changing.
My neighborhood when it’s night because there are no street lights - I can get so lost in the familiar roads when it’s a really dark night.

My head right in this moment in time where I feel like everything in my life is changing.

I hope the transition to a new head space goes as smoothly as possible!

Re: streetlights - does anyone else notice them going out all the time? My Mother and I could not go for a drive a night without noticing at least one that we drove under going out. Apparently this is unusual. And until he met me, MrPants had never experienced it. But those few seconds when you drive under a streetlight that has just gone out, thats an other space.

Check Google – there are some really long discussion threads about this. A New Age friend of mine insists it’s because someone is angry/stressed, possibly with liver issues.

I went through a period in the early 2000s where this happened to me all the time, but it seems to have faded off now.

We go through lightbulbs, a lot.
I always just thought lightbulbs were just… bad? And didn’t last long?
I had no idea some people don’t change lightbulbs more than once a year?
We even have some LED and CF bulbs. No change. None of them last longer than a year around me.

Apparently my entire family is like this. So we never knew it wasn’t “normal”. And I guess we always just extended that thought to streetlights too?

I wish I could make lightbulbs go out on command! That’d be a neat trick!
But it happens so often that it were my liver I’d be pretty damn ill!

Apparently my entire family is like this. So we never knew it wasn’t “normal”. And I guess we always just extended that thought to streetlights too?

Ah. Magnets in the blood.