Site managers and new moderators: what the heck is going on here?!? I thought we agreed that moderation decisions were going to be 100% open, and then I see this??? This is some Jason-level nonsense. I’m not saying it didn’t happen exactly the way you say it did, but after our recent experiences Over There, this does not make me feel safe, warm, and fuzzy. 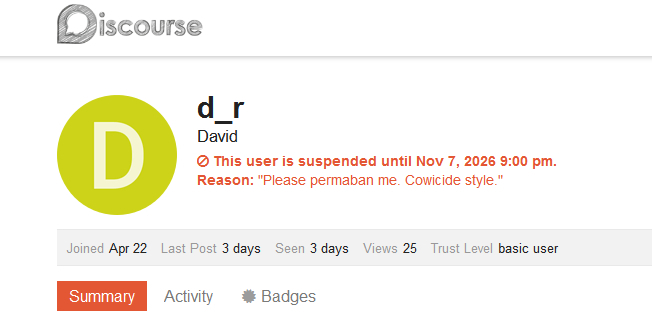 I received a PM from @d_r with the message as posted:

I briefly toyed with the idea of blocking rather than banning the user, since that would permit them to log in but not comment, but decided to honor their request explicitly. For context, Nov 7, 2026 is also when Cowcide will be allowed to return to BB.

This was before I appointed any other admins or moderators.

I apologize for not being more transparent. I would certainly have involved the community more if it had been a case where there had been complaints or flags, or any sort of escalation. In this case, the user directly requested the ban as stated, and I complied.

I’m amenable to reinstating the user, but I would want to involve them in the process, and it seems that they might not be interested.

I’m no longer registered there. Anyway, the problem has been solved, thanks all.

… “I’m no longer registered there” doesn’t sound much like “I was kicked out.”

But yes, transparency at this end would be nice, too.

I don’t know what the deal is, but d_r has been acting erratically for a while now; blowing minor disagreements out of proportion, taking comments on topics as personal insults, and just generally overreacting.

All I can say is that I hope whatever the real issue is, I hope that it gets better for him, soon.

Transparency is important. As part of the moderation policy, I hope that @ChickieD et al include a policy around transparency, as well as one for appeals (maybe even by jury).

In this case, it think everything was handled as best it could be, considering. It was a literal request (not like some “requests” on the other board) and it was done before we really have a mod board or policy. If there are future similar situations, I suggest a note be made here just so everyone knows what’s going on.

Just fyi, I have some time tonight to start digging in on moderation guidelines. I’ll be starting by revisiting all the relevant conversations and taking notes.

I really like the idea of transparency and as conversations move forward, I’ll take responsibility to update the board on current happenings with mod policy and conversations around it.

This weekend was so busy for me and I hadn’t looked at the guidelines at all. I am going out of town and will be really busy this weekend too so I’m not quite sure what to do. It seems like there is some urgency from the members to start to get some rules in place. is there someone else who can begin a draft? Another option would be to do a video conference with all the mods and just kind of start hashing some things out. Sometimes it’s just faster to work in person than it is to do things in writing.

Another option would be to do a video conference with all the mods and just kind of start hashing some things out.

I would be willing to participate it that – I’d even restore the system permissions for my camera! I know I’m currently operating in “short bursts” mode, so I keep having to switch between a few projects as I have energy to work on them. Is there a time convenient to most of us? I’m usually good during weekday afternoons, CST. (Call it 14:00 or so.)

I’m available tomorrow night then traveling …probably next time would be one evening next week. I do a thing Thursdays at 9 pm. Other evenings would work.

It seems to me that (well, my) shivers were caused by the style of message, being similarly styled to the, um, more contentious ones elsewhere, and similarly suspiciously worded. I don’t know if there are any terseness-requiring limits on the moderation reason field (and if so, whether that could be tweaked from the default), but even:

…gives them their parting word, and would look less like a “I consider that a request for a ban” sardonic reply.

(In feeding-back to users in my own roles, I’m personally a big fan of a notepad of standard replies (and text fragments) to reasonably standard queries (like this one: A type-a ‘account close at user request’) to c&p in and tweak - and in most jobs I end up with a ‘standard replies.txt’ on the desktop. One day I may move them to Google docs?)

To be clear, I’m trying to feedback, not be critical (after all, you’re one of the people doing what others talk about, so kudos is due) - just hopefully helping avoid old misapprehensions.

Or maybe I’m talking too much about a one-off event done for the first time here, by (actual) user request, and in some haste. You be the judge.

How much discussion do we have before hiding a post? I just saw my first flag (as in one that had not already been attended to by others): I Know it’s Texas …

I agree with the people that have flagged that picture - I certainly find the usage of ‘retarded’ offensive, but before I strike it down with great fury and anger, I want to get a better feel for this. So far, two people have marked it and I clicked “I agree with flag,” but didn’t do anything yet.

My inclination is to leave it, but PM the poster and say something like “Hey, that’s kind of borderline language … maybe you shouldn’t do that.”

I just flagged it as well. I meant to when I first saw it but was distracted by work. I would say either remove it or ask the poster to remove it. Leaving it sets a precedent that the various forms of “Retard” are acceptable here when they are not.

Honestly I grew up saying it a lot and try to filter it from my language but sometimes I make the mistake as well. So no shade at the poster.

… and that’s about the time I realized this is not a locked thread, is it? Gah!

After experiences “elsewhere,” I know I’m trying to use my new found powers for good. That might make me a bit hesitant to stomp on a post, even if I personally find it questionable. (That actually might make me hesitate more simply to make sure I’m not responding based on my own feelings.)

In the meantime, enough people have flagged it to auto-hide it.

I think letting it auto-hide was the right choice, at least in this instance. I believe it will automatically be deleted in 30 days, unless it’s un-hidden.

… and that’s about the time I realized this is not a locked thread, is it? Gah!

If my $0.02 is worth anything in this discussion, I think autohiding is more instructive than deletion in this instance.

Hiding it removes it from the conversation but still allows people to click it and see that using the word “retard” in that sense is not OK, in case there was any doubt. Deletion means only the poster of the comment can learn anything from the moderation, and should only be used in truly egregious cases imo.

Re: modding. My inclination is to try to work with posters via PM when they are members who appear to be trying to participate (not trolls).

Please ban me for 18 hours, I’m getting too worked up about a subject I’m trying not to talk about these days.