One of the most trenchant content warnings I've ever seen

I know it’s juvenile, but I can’t stop chuckling at this warning message. It somehow manages to be both preternaturally accurate and blindingly obvious (given the title/headline), while at the same time being legitimately ominous. 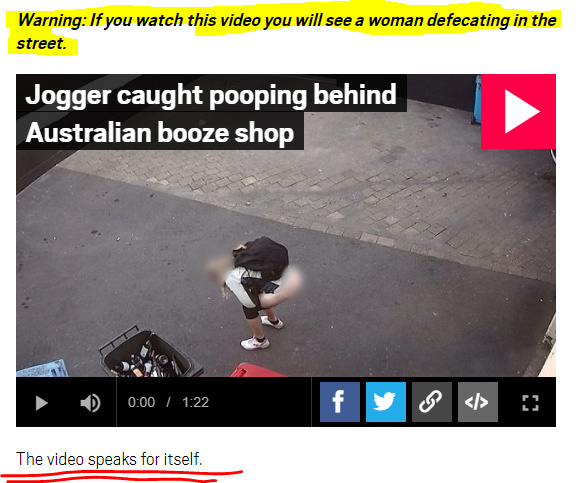 I hesitate to post the link1, but if you’re truly curious, I’ll save you the trouble of googling it. Seriously, though, don’t watch it. It’s not particularly awful, but I kind of wish I hadn’t. So much so that I felt compelled to share it with all of you fine people.

1. I saw this on some aggregator earlier today and had to hunt down the original article to post it here. In the process of searching for it I ran across another version of the video that blurred not only her face and buttocks, but the – ahem – movement itself, as well, and, frankly, it was not nearly as compelling.2

2. Some days I don’t know what to do with myself.

I can’t remember the movie, it was geared toward children and was one of these kind of hazy nostalgic kinds of movies, ala Stand By Me. Something about a boy and a grandfather or older man who acts like a father to him? And woods? And the boy gets a good hard spanking. Growing up, that was the norm. Watching a 10, 11 year old on the screen get a whoopin’ brought home how cruel it was.

Wow. This seems to be becoming a thing here in Straya. It follows a bloke getting caught quite recently after shitting in a walkway of a residential block of flats like 30 times. He was the CEO or something of a large aged care company and resigned after being caught on video. Strangely enough, he was a jogger too!

Y’know, that guy, I have to think, was deliberately being a shitass, since he did it in the same place 30 times.

As for this current one, well, I’m glad they blurred her face (though the butt-blurring strikes me as odd, if they’re gonna go ahead and show the poop itself). I mean, I haven’t watched the video (not because it’s too revolting but just because I can’t really be bothered; I know what poop looks like), but if she’s squeezin’ out an emergency deuce, well, there but for the grace of Dionysus go we all.

As for this current one, well, I’m glad they blurred her face (though the butt-blurring strikes me as odd, if they’re gonna go ahead and show the poop itself).

Which end is her head? I guess we’ll never know.

I’ve never had to take an emergency public shit, but I’ve had to emergency pee a few times, so I’m not totally unfamiliar. What makes no sense to me is, why out there in the open? There are dumpsters one might go behind, or even just closer to a wall, unless one is intending specifically to shit in a place it’ll be stepped in.

Well, I went ahead and watched. (You’re welcome.)

The article says it was her second time doing it, so… I have to think there’s some kind of reason for it. I mean, you leave a human-sized dump behind a store, someone’s gonna notice. You do it again, they’re apt to catch you and demand satisfaction. Personally, I’d never show my face on that street ever again.

I was kinda impressed by the distance achieved. She had some windpower going on there.

Exactly, that at least gives you some idea of what to expect. Most of the time it’s “graphic scenes” that “some people my find disturbing”, or the ubiquitous “viewer discretion is advised”, but you never really know what you’re getting into, and often it’s fairly tame stuff. But with this warning I felt like I could make a truly informed decision. The specificity of it just tickled me, I guess.

Wow. This seems to be becoming a thing here in Straya. […] He was the CEO or something of a large aged care company

We had something similar here a while back, but it was a school principle or superintendent, and he was dropping bombs on a rival school’s football field, like every day. Some people just never outgrow their high-school shenanigans, I suppose.

I have to think there’s some kind of reason for it.

I’m not convinced of the jogger angle – how often do joggers wear big backpacks when they’re out for a run? My working theory is that she’s on her way home from staying over at her boyfriend’s place, but it’s a fairly new thing and they’re still in the “girls don’t poop” phase of the relationship. She didn’t really want to stay for coffee and a bran muffin, but she didn’t want to just rush out, either, and she cut it too close trying to get home to her own bathroom in time. Twice.

Shoulda had that bran muffin.

My working theory is that she’s on her way home from staying over at her boyfriend’s place, but it’s a fairly new thing and they’re still in the “girls don’t poop” phase of the relationship.

Nah, not buying it. The Venn diagram of “girls who won’t poop at boyfriend’s house” and “girls who’ll calmly shit outside the back door of a liquor store in broad daylight” is this:

coffee and a bran muffin,

And this of course reminds us all of… 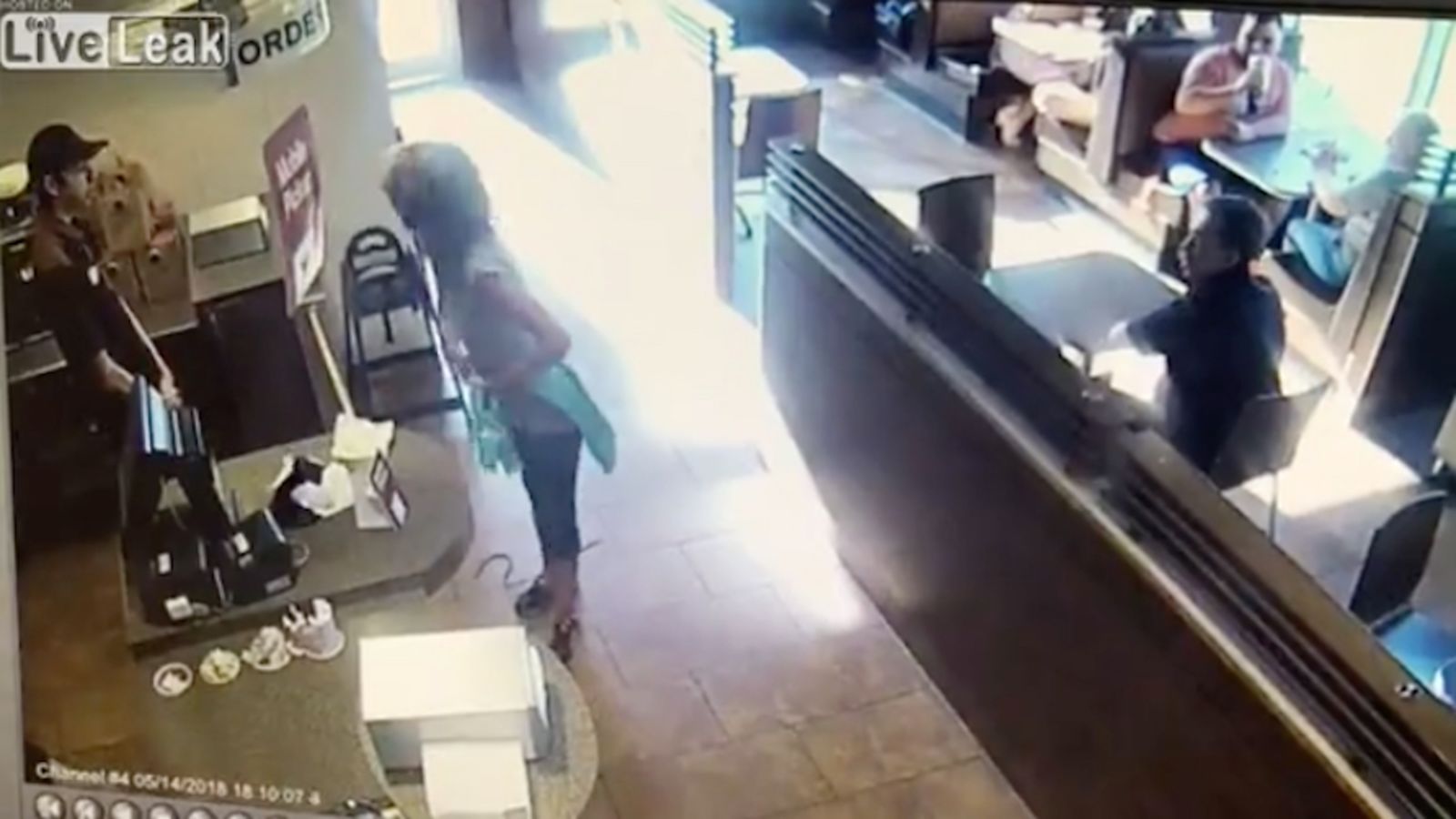 Woman Furiously Shits On Floor Of Tim Hortons, Throws It At Employees [Update]

A woman in Canada was so incensed about something Tim Hortons employees did or didn’t do that she dropped her pants, took a dump on the floor, threw it, grabbed some napkins to wipe her ass, threw those too, and left.

This truly is a shitty time to live in.

Somehow all this stuff strikes a chord with me. I’ve never done it, and never would, but I’ve often thought of it when someone at a store said “I’m sorry, our bathrooms are for employees only.”

I was at a state university for grad school that had a huge campus, with buildings separated by significant walks. The fucking bookstore did not have available bathrooms. I finally got up the courage to request dispensation due to colitis. But I had to go to the second floor, through a door that said “Employees Only,” walk down a hallway past offices and people saying “Excuse me???”

OK, it was the University of Utah. Might as well give the Home Of Cold Fusion some more free advertising.

Many places have removed or put locks on public restrooms, and private establishments some places (probably the same ones) lock them with a for-customers-only key, which may require waiting in a line for awhile (longer than you can hold it) to buy the cheapest thing you can find and throw it out. What do they expect?

It doesn’t take much, really, you don’t even need a disease that affects those functions. Just one extra cup of coffee or antibiotics for something completely unrelated can put you into a state where your ability to pre-plan bathroom stops shrinks to minutes. Any humane person would realize that, and the consequences of sealing off all the bathrooms.

I might have used someone’s front lawn as a port-o-potty during Mardi Gras, but normal rules of society are off then.

took a dump on the floor, threw it

Sez Mr Monkey his own hairy self.

Who better to judge?

Meanwhile, it turns out that besides using “so-called” to cast doubt, you can use it sneak puerile humor into ostensibly serious writing. 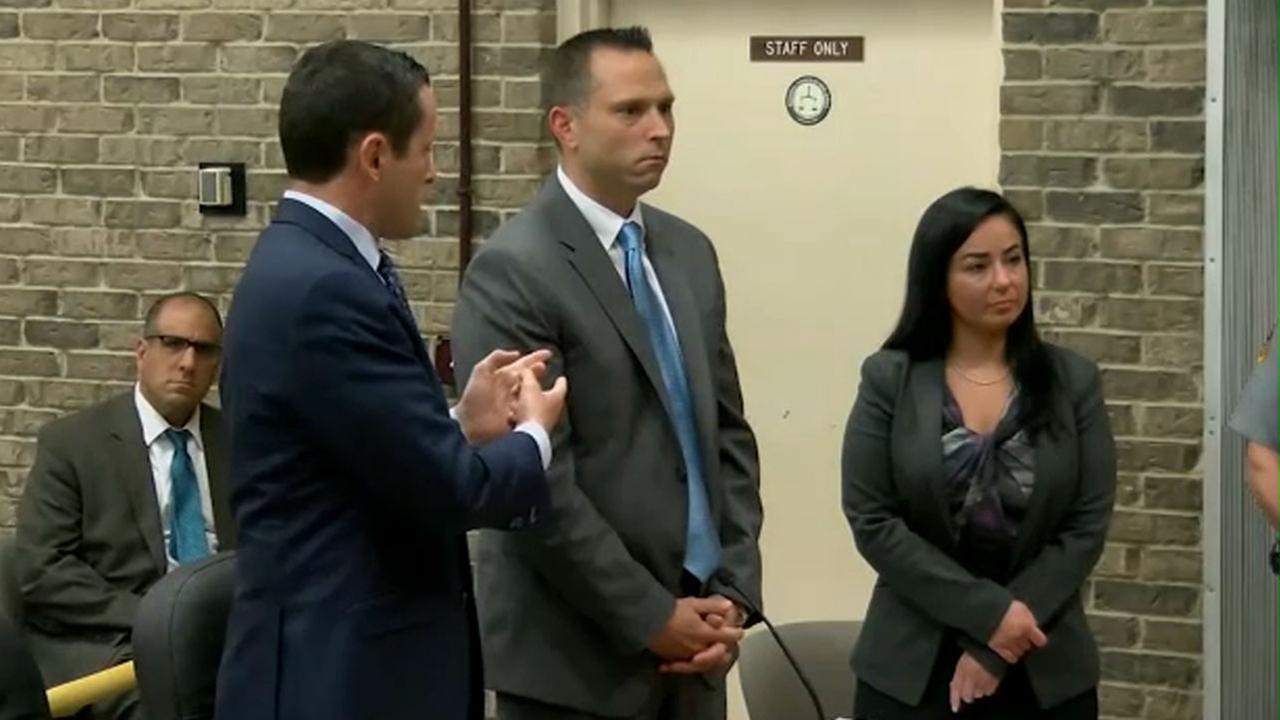 So-called 'Pooperintendent' relieves himself of duties

The New Jersey school superintendent accused of relieving himself on a high school track several times has resigned.

…Are there usually so many of these stories, or is this an exceptional run of them?