I have to admit to being surprised that there were no “Star Wars” based posts here or on that other site.

So here is my contribution to prepetuating global consumer culture.

And Han did indeed shoot first. I was there, I saw it happen.

Somewhere in space, this may all be happening right now…

If you haven’t been there, you should definitely check it out:

Kitbashed - The Origins of Star Wars

The definitive guide to the ancestry of Star Wars by Michael Heilemann.

Just re-saw it earlier this week. Still holds up beautifully. For me personally, I think that Empire may be a bit better, but watching it forces me to contemplate the numerous sequels, prequels, etc. which I’m less enthused by, so I normally just stick with the original.

I love THX, and wish I had held onto my old VHS, so I could watch it without Lucas’s new additions.

One of my first memories is of going to the theater to see Star Wars with my dad back in '79 for the re-release; I was barely 5. I was enthralled, and thought it was the greatest thing I’d ever seen. My most vivid memory is of the TIE Fighters roaring through space. I went home and excitedly told my mom the entire story as best I could remember it.

As with most movies back then, I fell asleep in the theater. I didn’t find out the complete story until I read the novelization.

(So that’s why those jerks on the playground had me play C3PO!)

If you haven’t been there, you should definitely check it out:

I’ve just read the in-deapth history of the Millennium Falcon.

i watched the Harmy De-Specialized edition last night in celebration of the 40th. still love it. and YES, it was just “Star Wars,” dammit. the “Episode IV: A New Hope” was tagged on in 1981 for the re-release.

This is Relevant To This Discussion: 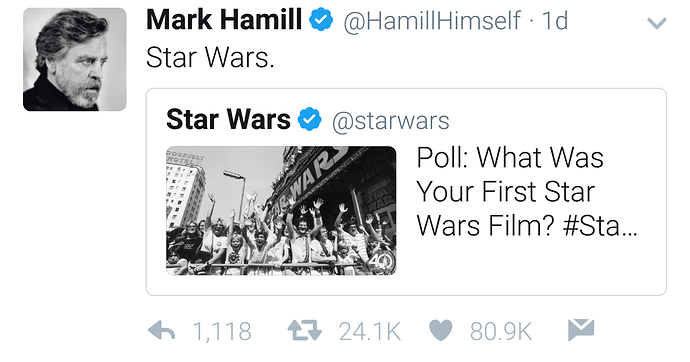 Well, Mark, that would be Star Wars.

(I be oldz, seen all of 'em in theater, first release, even the ones that don’t exist.)

He could do worse.

I’m a pretty big fan, and here’s my controversial statement for the thread: New Canon > Legends (so far)

I need to go back and watch the movies again, but I have no idea when I will get the chance to. I have not even seen Rogue One even though all I really want is Vader murdering everything.

I had a t-shirt with that image, back in the summer of '77. Seeing it still brings a feeling of wonder and magic.

In an age when all trailers use the exact same formula, music, and audio & visual effects, that trailer is refreshingly quaint.

Rosebud was my landspeeder