The Joy of Gardening

Last week we had tacos,

with greens from our aquaponics system!

(The helpful hint on the right side of the screen says that this topic is similar to: We can now convert every film and TV show from the last 80 years into HDR which seems pretty random)

Congrats! Hopefully it was all tasty and healthy and yum!

Thanks! I’m pretty excited about it, and hope to expand/improve the system.

It’s been a good year so far in the allotment. We’ve had a good mix of rain and sun for a change (usually we just get the rain). We’ve had good crops of strawberries, blackcurrents, blackberries, french beans, broad beans, runner beans patty pan squashes, brocolli, lettuce and potatoes. The cabbages are looking the best we’ve had (we usually struggle with brassicas).

However, the marrows & courgettes aren’t doing much at the moment (although they went in late), and we’re struggling with root vegetables this year and our garlic did nothing.

Mrs Cynical and I have been trying our hand at growing chillies for a while now. We successfully germinated 32 anchos, 28 naga jolokia, 12 chocolate nagas and 12 Carolina reapers, and we have been trying to germinate a bunch of other seeds in Ziploc bags but have been confused that it all seems to be going so slowly.

It occurred to us last week that the temperature outside is pretty much constantly ideal for germination (usually between 28°c at night and 32°c during the day) so, although we were worried about the seeds getting baked in direct sunlight, we decided to throw caution to the wind and move them outside: 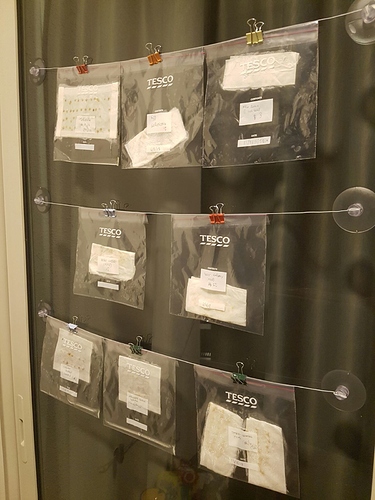 Checking them again a week later, we were a bit shocked to discover that we had 76 habanero seedlings and that another 38 seeds from a single (strain unknown but tasty) pepper had all germinated at once: 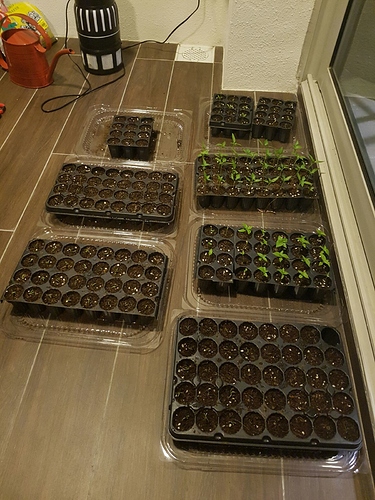 I don’t think either of us were expecting it to be quite as successful as it was and we sure as hell don’t know what we are going to do with this many seedlings. We should probably have transplanted them a bit earlier, so I would be surprised if more than 60% of the new seedlings are viable but it seems we have accidentally turned our balcony into an industrial-scale farm.

I have access to a commercial kitchen and a friend runs an independent deli/butcher, so I’m giving serious thought to trying to bring them all to fruit and churning out hot sauce by the gallon…

A ton of the seedlings have survived to round two of The Capsaicin Games and we have repotted them: 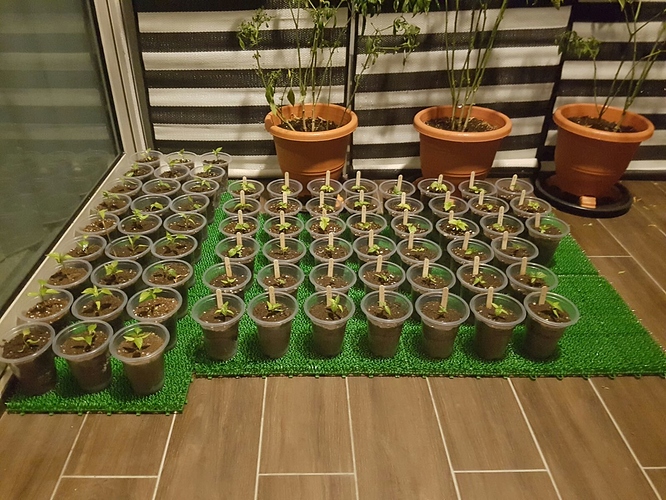 We had five mature plants that we bought from a nursery that were out first foray into growing chillies. They were useful learning tools that helped us to adapt what we were doing with the seedlings, so that we can be sure that the next generation of plants (that we actually care about and we can’t buy in the supermarket) will do well but one of them had a whitefly infestation that jumped from plant to plant despite repeated treatment, and completely fucked them up despite our best efforts.

Now that we have repotted the seedlings and given them enough shade from the Singapore afternoon sun, I thought it would be better to scorch the earth and kill off the mature plants to stop the whitefly from spreading. Better to kill off five plants now than to try to stop a whitefly infestation in 200 plants, right?

Somewhat stupidly, after making that decision, I turned to Mrs Cynical and jokingly said “I think we need to Velveteen Rabbit this shit”, assuming she hadn’t read the book as a child: The Velveteen Rabbit (or How Toys Become Real) is a British children's book written by Margery Williams (also known as Margery Williams Bianco) and illustrated by William Nicholson. It chronicles the story of a stuffed rabbit's desire to become real through the love of his owner. The book was first published in 1922 and has been republished many times since. The Velveteen Rabbit was Williams's first children's book. It has been awarded the IRA/CBC Children's Choice award. Based on a 2007 online ...

Turns out it was one of her mother’s favourite bedtime stories and (even though I stand by the decision to kill the infected plants) now I feel like a complete arsehole.

Looking good! I gave up on the re-potting business years ago. Instead, I start 4-5 seeds in a beer cup (those red 16 oz cups the kidz use for beer pong). Poke a hole in the bottom of the cup before putting the dirt in, though. When they’re big enough to go in the ground, either plant the whole cup in one spot, or separate them (normally they’re still small enough to so this if you’re careful).

Yeh, next time I think we will germinate them in bags and then put them straight into cups, and skip the seedtrays. I read that they like to be a little rootbound when they are young but I don’t think the seedtrays were helpful, apart from in terms of saving compost on seeds that eventually turned out to be non-viable.

In the meantime though, we still can’t shake the whitefly; despite killing the obviously infested older plants, spraying occasionally with neem oil and shaking our fists at the heavens, they keep coming back.

So: we are individually wiping the tops and bottoms of every leaf with neem oil every 48 hours for the next couple of weeks (boring but it seems essential), planting nasturtiums (they repel whitfly, apparently, but even if they don’t, they’re both pretty and edible) and this: 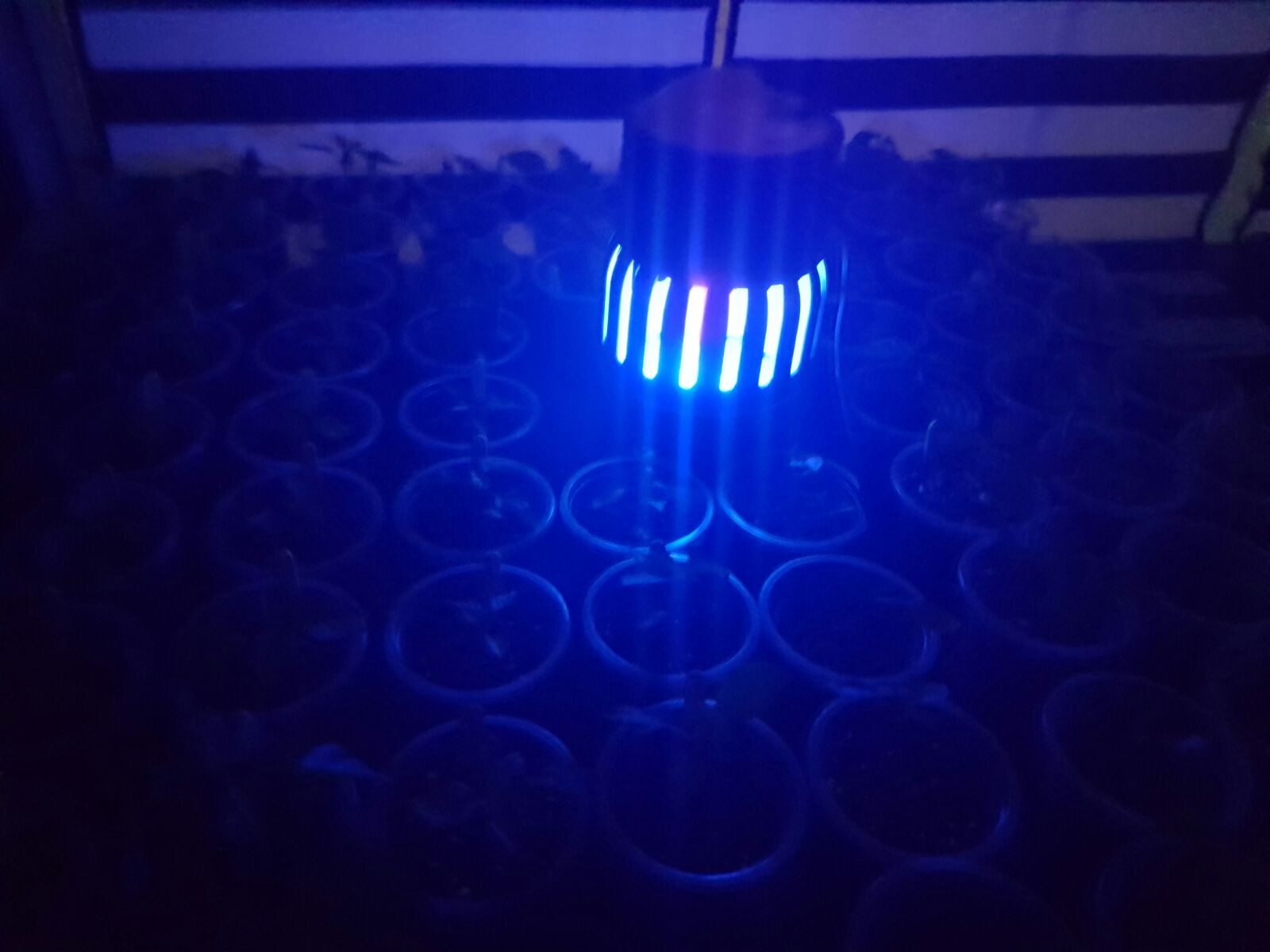 Fly into the light, you toerag whitefly bastards!

Ahem. The Journal of Applied Entomology ( http://onlinelibrary.wiley.com/doi/10.1111/jen.12172/abstract) says UV at night increases whitefly flight and therefore the efficacy of trapping. I half-jokingly suggested napalm while we were wiping today, so even if it only helps a little, I’m game.

Looks kind of cool, too

I’d be interested in knowing if the nasturtiums work, we suffer form whitefly on our sprouts and as we already grow them it would be an easy solution.

No luck finding nasturtium seeds at the nursery today and given that the whitefly we do have seems to have been brought in on mature plants we bought, I’m reluctant to buy anything other than seeds.

Does anyone know a reputable source for nasturtium seeds that would ship internationally?

I could send you some if you want? PM me if you’re interested and I’ll harvest some at the weekend.