I am never going to be able to work a regular office job again. They would have to provide some really specific perks. 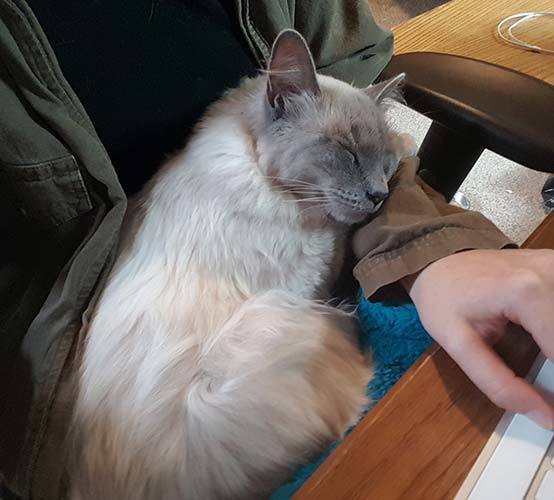 I’m not looking for a different way to make a living, just stating that lap kitties are a necessity for me.

Manny has been my coworker for most of his life, actually. He doesn’t carry his own weight, or pay his own bills, but he does kill his own mice. 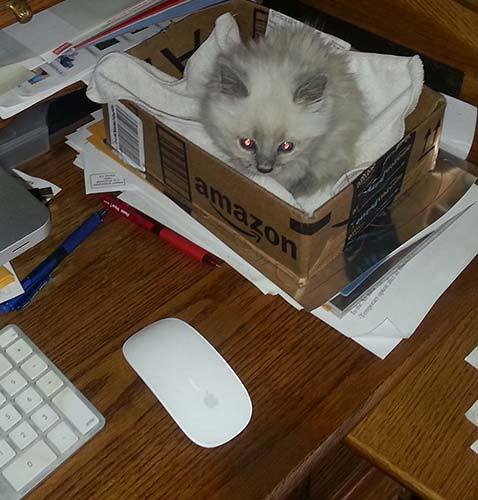 And he is a top notch Chief Morale Officer, except when he wants to sleep on the printer.

I am never going to be able to work a regular office job again. They would have to provide some really specific perks.

Oh good, I’m not alone in this! Agatha usually either curls up in my lap while I work or hangs out in the cat tower overseeing the work process. I started working from the laptop at our kitchen table so she had more options and could watch the birds and squirrels. 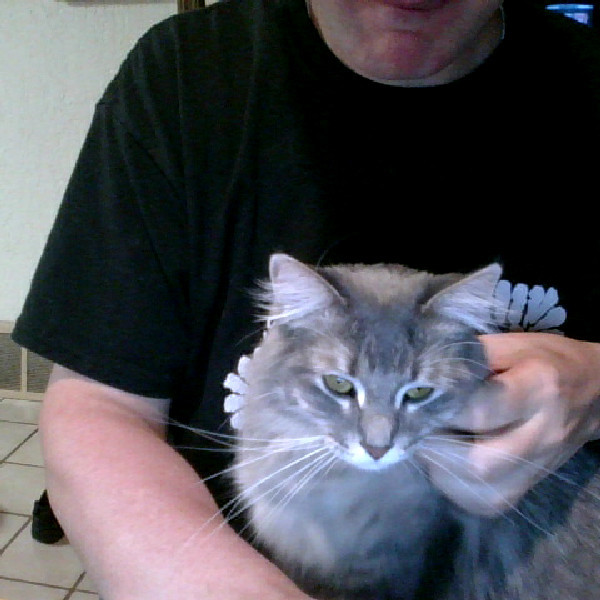 If we’re up in the office, she tends to hang out on my partner’s filing cabinet. 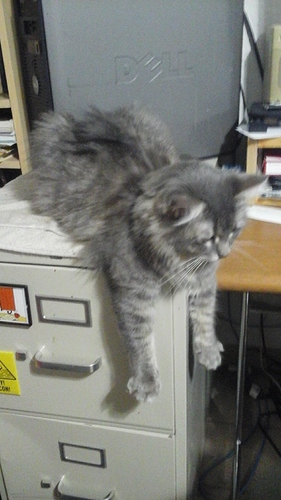 The boys tend to wander in and out, especially around lunch time, but Agatha’s pretty much my office manager.

Agatha is very pretty and her face markings are elegant! But that filing cabinet position is derpy and cute.

But that filing cabinet position is derpy and cute.

Yes, yes it is. Then again her motto seems to be “Dignity does not get your tummy petted.” 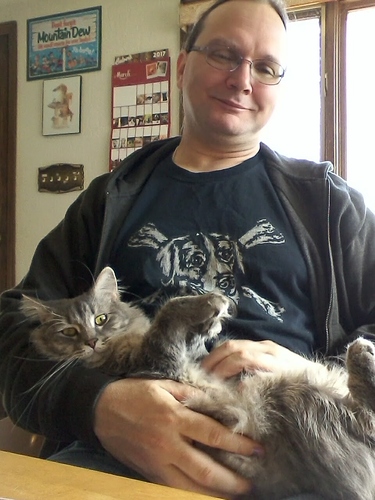 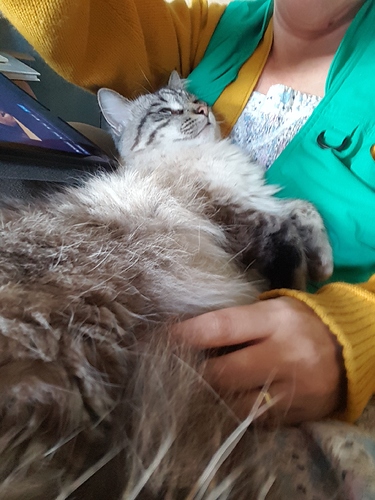 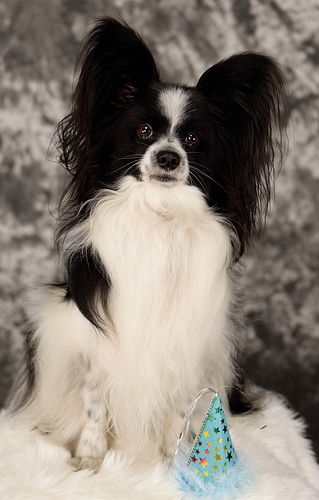 This is Ushi. He’s a Papillion. He just turned 7. He loves cookies, chasing rabbits, howling, and naps. 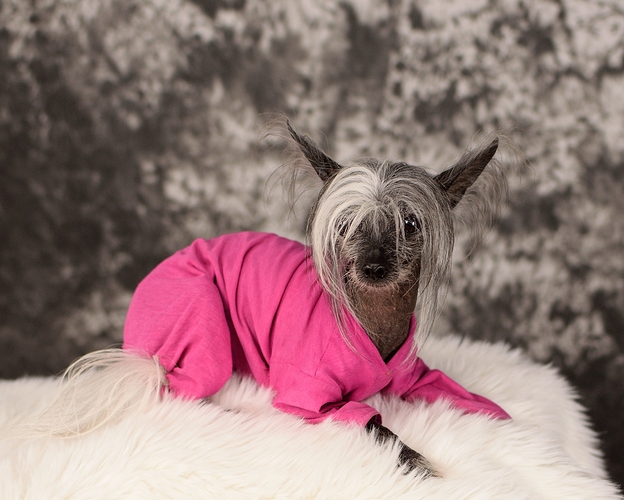 We have 5 cats. We were at 4, and thought that’s a good number, but then George showed up, and fit right in. I couldn’t say no. Plus he was already fixed.

Then a couple of weeks ago, this guy showed up: 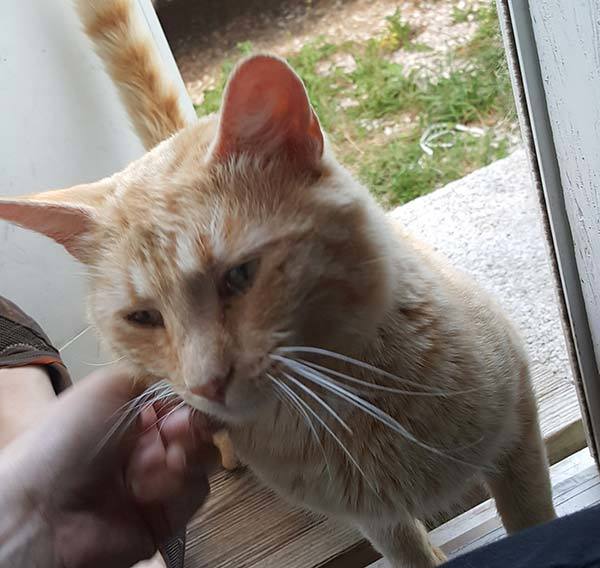 He is sweet, but pretty young, and not fixed. We have rules about cats with testicles, they stay outside. Cats who come inside are fixed.

I posted a found cat ad on craigslist, and someone contacted me. His daughter’s cat ran away last summer, but she thought this might be him. That’s a long time, but you never know, right?

They came by today to see if it was their guy. She said yes, right away, but the dad was skeptical. The kitty was happy to be petted by them, and picked up by both of them. They took him, with the promise that if it didn’t work out he could come back here.

When I was her age, my cat was a lifeline in (what I didn’t know at the time was) depression. She smiled so wide, holding him. I had already decided that if they would give him a good home, I would let him go. I even gave them a bag of kibble so he could have something to eat when they got home.

I’m sad, and I’ll miss the little dude. But, if he found a loving home and family, then it works out for the best. The dad was nice, and had a really mellow and kind vibe. But, my strongest hopes are that the cat and the girl are happy.

Here’s our kitty on her castle 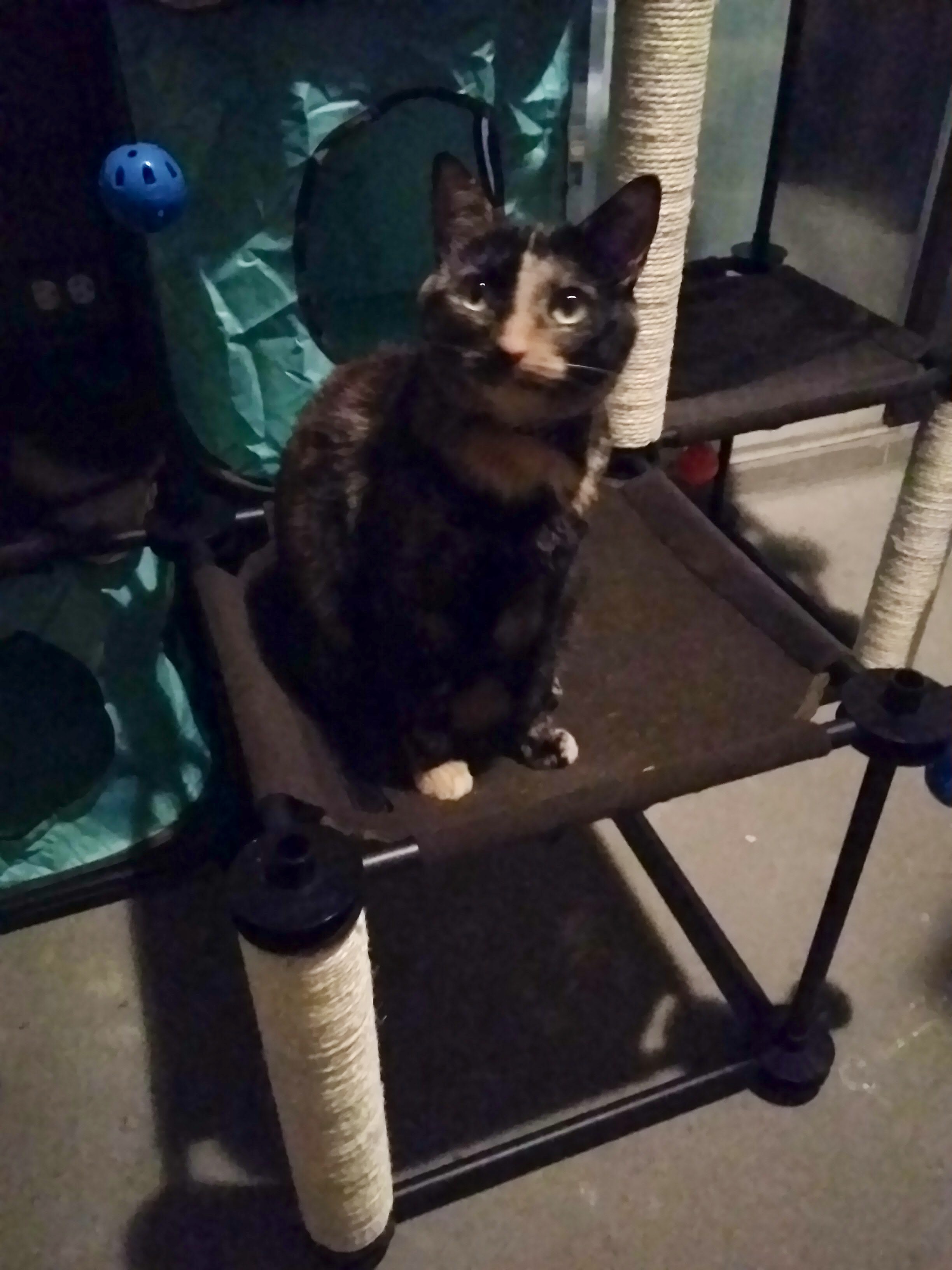 Mr Fwuff is recovering nicely from his adventure; packing the weight back on and signs of trauma in his behavior are fading. He even seems to be returning to his old self before we got Miss Fwiff, who was initially less welcome than we were hoping.

The Derpasaurus does not approve of having his picture taken. 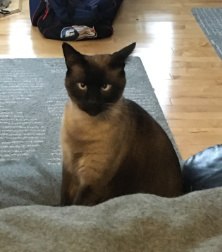 But I took one anyway.

Is Derpasaurus his actual name? Or is it an honorific?

It’s his nickname. He’s about as graceful as your average seal point (not him, but boy did I do a double take the first time I saw it):

Before I was born, my parents had a genuinely cross-eyed cat. One day he went missing, but it wasn’t long after that the shelter called. No tags or tattoos (and this was coughbefore the era of microchips cough), but the lady was sure they had the cat. “I knew,” she said “when he tried to jump on the couch and missed.”

Since we’re doing pictures, now: not long ago this tree was reviled as being all wrong. Funny how things change. 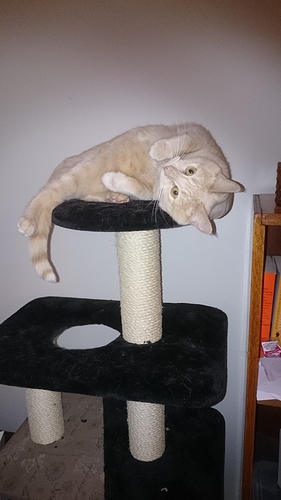 Having seen a cat hunt, I am horrified and fascinated. I guess I’ll be skipping wings tonight.

(He ate everything except the wings) 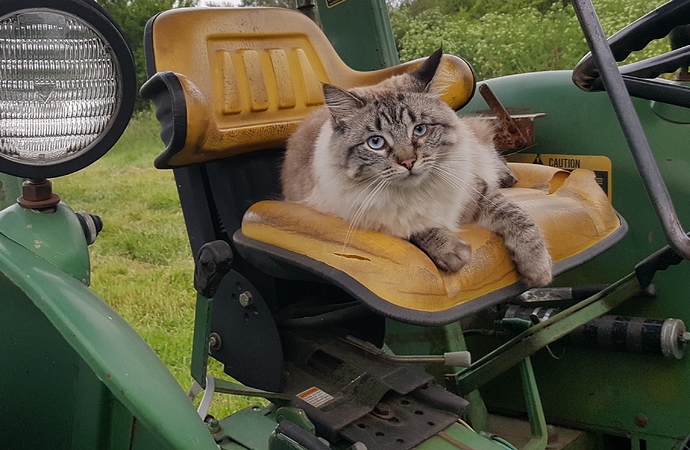 The theme for this morning was dead rabbit, bleeding on the carpet. By the time we woke up, it was dead, but the blood was fresh. As was the huge amount of vomit from whichever cat found the snack to be too rich.

There are no photos, so you are spared that, but this is also farm life. Probably not Iris, though…

For us, the cats didn’t hunt rabbits because the dogs were faster. Turns out a shar-pei can move when motivated and are proud to contribute to the family meal.

The cats tended to stick to birds, mice, and the occasional bird/rat hybrid (shall we call them bats? Let’s call them bats). Nothing like wondering whether that bleeding thing flopping around the living room floor and trying to crawl under the couch is rabid… especially when she that brought it in isn’t in a sharing mood when you try to take it away.

Years ago, I had a mate who lived near a cemetery, and had a hulking tank of a cat. His front lawn was regularly adorned with rabbit entrails.

I guess that made decorating for Halloween a bit easier at least!