What to do about flags

When I receive flags, I get a notice about the reason why the person flagged that post.

What are Flags and how do they work?

Flagging is an in-built moderation measure in Discourse, intended to dissuade bad behavior and spam, as well as to promote civilised discourse. If you want to raise an issue about a post without derailing the topic at hand, the best course of action...

and a thread about how to use Flags

So What Exactly Happens when you "Flag"?

What happens when you flag something? For a single flag, the post appears in the staff flag queue. Staff can review the flag and choose which action to take, including hiding the post, deleting the post, ignoring the flag, and more. For full details...

I, personally, do not like to have conversations hidden. I’d prefer for everyone to know what was said so people can see why two posters might be having some bad blood, or just so everyone equally knows what is going on - sometimes someone comes in after a post was deleted and others were there before, so it’s like there’s a clique that’s in the know and another that feels left out.

Obviously if it’s off topic, then I split it to a new post, and if it’s just spam or something totally rude then I can hide, but what about when it’s more complicated and personal? What would you like to happen?

…what about when it’s more complicated and personal?

I am taking some time away to process things and catch up with home matters, but this is something I think about a lot. I find it useful to make a distinction between inter-personal problems (somebody called you names, did something to you), and truly personal problems (you simply don’t like what you are reading or feeling).

I, personally, do not like to have conversations hidden.

I disagree on this point, assuming we’re talking about hidden in the way Discourse hides a post and leaves a little note, as opposed to hiding via deletion. I actually think mods should feel free to do this liberally. I don’t think it should be moderator’s responsibility to handle bad blood or a personal spat, and hiding a couple posts and sending a PM to take the conflict somewhere private seems like a good compromise.

Edit: Thanks for opening the topic!

Hidden but not deleted (unless egregious) isn’t a bad thing, necessarily. You can click to see it, but it’s like a blanket mute and it lets readers know that the community (or enough members of it) find the comment problematic.

How far to take things will always be a judgement call. Tweaking settings so only mods have one-flag hiding powers may be an option (thus needing >1 non-mods to make it happen), but I think Discourse’s hiding really is a feature and not a bug.

Why was this flagged?

Likely because it was a response to someone who asked them NOT to respond to them?

Because I have repeatedly asked that the person who made the comment not address me or try to engage me in any way shape or form, across two different site platforms… yet he seems to revel in ignoring others’ set boundaries, in making people who want no contact with him uncomfortable, and in defying the norms we have set forth as a community.

There are consequences to flags beyond simply making a topic easier for one to read.

Flagging of posts also directly impacts a person’s reputation, through the “trust level” metric. Affecting what areas of the site one can access, the ranking of user-created topics, as well as future moderation decisions.

It often is used as an accusation - such as two flags I got today that cite offense, abuse, or violation. Often coupled with actual in-thread accusations, which then cannot be addressed because replies are hidden. So, to a cursory reader, they see that I supposedly said some thing based upon other people’s posts, but any attempts to clarify are hidden. Why are accusations a serious matter when somebody makes them, but they are not serious enough to follow up upon? Doesn’t that imply that they are done for convenience, and as such, frivolous? It’s amazing that these are almost invariably topics which are advocating for some form of social justice - yet disagreements are punished without any pretense of a due process. Sure, it’s informal, but being informally accused of advocating harm is still distressing. Offense, abuse, and violation are themselves serious things to accuse a person of.

Since it is a system which promotes perceived safety by means of informal complaints, people use it and it effectively becomes a form of enforcing group norms. So the norms are determined by those who anonymously complain the loudest and the most, which is basically populism. Again, one of the contemporary problems that many here claim to be trying to address in society.

Before people flag a post, they should read the guidelines and use them. Those are supposedly the protocols/criteria that we use to hold ourselves and others accountable. I had to constantly point these out on BB, and nobody cared, which caused resentment and made the claims of community feel rather hollow.

Be Agreeable, Even When You Disagree

You may wish to respond to something by disagreeing with it. That’s fine. But remember to criticize ideas, not people. Please avoid:

Instead, provide reasoned counter-arguments that improve the conversation.

Determining what should be “offensive” depends upon context. A post does not become abusive based upon how you personally decide to interpret it, bringing your own context. And if it would not be offensive to you coming from a different person, then this clearly indicates that your problem is with that person, rather than the post. And if a poster is actually causing harm, trying to hide their posts and topics would still be an ineffective way to confront actual problems.

I seem to recall that they do not impact if the mod disagrees with the flag, though I could be wrong on that.

There’s no way to complain “loudest” or “most” with flags. One person gets one complaint. If enough different people complain, then things happen. And even then, the mods are the ultimate judge of whether it stands and/or whether further action is needed.

Its also not “anonymous”, not really, the Mods know who is complaining, and often will have conversations with said “complainer” to talk about the situation.

I seem to recall that they do not impact if the mod disagrees with the flag, though I could be wrong on that.

That is correct, at least to my knowledge.

It takes more than one flag from a regular to autohide a comment (unless it’s spam; I think. Not sure if it’s the same here, because we so rarely need to deal with spammers.)

Flags from mods and staff carry more weight than flags from the rest of the community.

And even then, the mods are the ultimate judge of whether it stands and/or whether further action is needed.

Also correct; I’ve had a few conversations with Ken on the other site where he understood why I found some comments flag-worthy, but ultimately he let them stand.

It’s okay; it was a fair question.

This isn’t Happy Fun Ball’s playground; we’re allowed to question the authorities without the ‘earth being scorched.’

It is not easy to change the entire basis for you interact with a community based upon the demands of one person, but I try my best.

I’d like to preface this by saying that I’m on the spectrum. Reading faces and body language is hard. Understanding how my words are taken is not. I take extreme care to avoid distressing folks.

For the record, I’ve had… Six? Posts eaten at bb. In each case, it was because my words caused harm. And you know what I did? I apologized and learned not to cause others harm.

An easy way to see if you’ve made people uncomfortable is to count likes. If you have less than five, you should probably stop. If you’ve been flagged repeatedly, check your content. If your post causes a thread derail, atop. And when a post causes a topic lock, don’t immediately try to bring it up again when the thread re-opens.

Flags are the community way of asking a poster to stop.

There are currently three users on suspension - and one is a bot. If you cannot trust your current or future selves to minimize harm, consider requesting to be added to that number.

I’ve seen some brilliant folk ask for suspension because they knew they couldn’t help but be in the centre of a maelstrom on one particular subject.

This board has, at times, gone weeks without a flag. And then there was yesterday.

The staff have tried to be accommodating. I’m already helping to raise one child. I no longer have the patience to deal with those whose presence are not unlike a disruptive child. And frankly, it isn’t fair that the community should be expected to deal with it, either.

EDIT:
I meant to send a PM. Leaving this up because #TransparencyMatters.

When the same few people are the ones who flag your posts, that is “more” and “louder”.

If you’re getting flagged by enough people to trigger hiding, and/or the mods are agreeing with the flags, then trying to blame individual flaggers for flagging you is silly. If that many unconnected people are all saying that what you’ve said is problematic, you’d do well to examine what you can change.

then trying to blame individual flaggers for flagging you is silly.

I also want to state that until I was recently addressed directly, I’d been steadily ignoring repeated attempts to catch my attention; sporadic ‘likes’ and comments on my posts, despite the fact that I’ve specifically requested to just be the left the fuck alone, several times. 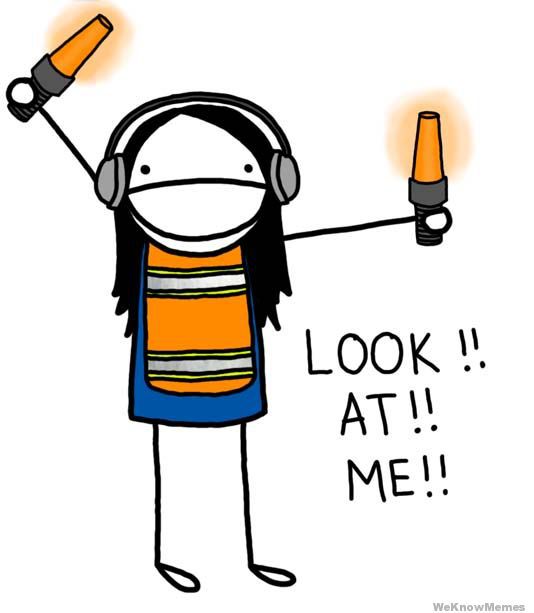 I didn’t start flagging until the attention seeking escalated back to making direct contact.

An easy way to see if you’ve made people uncomfortable is to count likes. If you have less than five, you should probably stop

This is a terrible idea. It makes discussion into a popularity contest. I don’t really use the like button a lot and people tend to reciprocate that. When I make a post that doesn’t get a lot of likes, my first thought isn’t “oh dear, perhaps I’ve offended people, I’m not going to pursue this any more.” Not liking a post implies indifference, not that I’m causing people pain, with the exception, of course, of the people here who’d rather I didn’t post here at all, which is what the mute script is for.