Is there something your family and you do during the Holidays growing up that you look back on and think. “That’s kind of odd.”

During Christmas, my dad would bring out a large notebook with grids he called the “Data Book.” He would write down the year and make a note of what each present was To and From and the contents.

It’s not a holiday thing, but my family has a thing about copper kettles.

When I got my own place, my grandmother gave me a copper kettle with Delft ceramic handles. All she said about it was that she had one, when my mum and my aunt each got their own places she gave them one, and now I had one. I was told it was a “Dutch thing”, but I noticed not all the relatives there have one, and I have met lots of Dutch people who have never heard of such a tradition.

I’m quite fond of mine. I may give the nieces ones when they move out, if I can find a place to buy them.

Spoilered since it’s an apocryphal story and not a true tradition.

A newlywed couple are preparing a special dinner and the husband asks his wife, “Why do you cut the end off the ham before you cook it?”

The wife pauses for a moment and replies, "Because Mother always did. I’ll ask her when they get here.

After dinner, the two call up the young wife’s grandmother to ask her why she cut the end off the ham.

The grandmother thinks for a moment before replying, “Because the pan was too small.”

I don’t know if it’s actually strange, but we always celebrated on Christmas eve. Dinner, presents, visits, all the fun things were on Christmas Eve. Dinner varied, but was it was paella more often than anything else.

Christmas morning is for fried cakes (bread dough fried in oil, not so healthy, but so SO good with syrup or jam). The rest of the day is for playing with presents, napping, and snacking on cold fried cakes and leftover paella.

I don’t know why we did it this way, but Christmas in our home was entirely secular without a tree or anything. The only standard Christmas decorations were stockings, but that’s because you have to have somewhere to put the oranges, apples, chocolates and toothbrushes. Always toothbrushes.

I don’t know if it’s actually strange, but we always celebrated on Christmas eve. Dinner, presents, visits, all the fun things were on Christmas Eve.

That’s how it is done here in Germany.

(Random Christmas trivia: That’s also how the British royal family does it because German Prince Albert imported the custom.)

My doesn’t have any really unusual traditions and these days Christmas in our family is a rather low-key affair. But what surprises some people is that when I was a kid we used to have real candles on the tree. I don’t think I’ll get used to the fake ones.

All these years, just across the lake from me, people were Googling green bean casserole and corn casserole, and I’d never heard of either until the discussion we had on this very board recently: 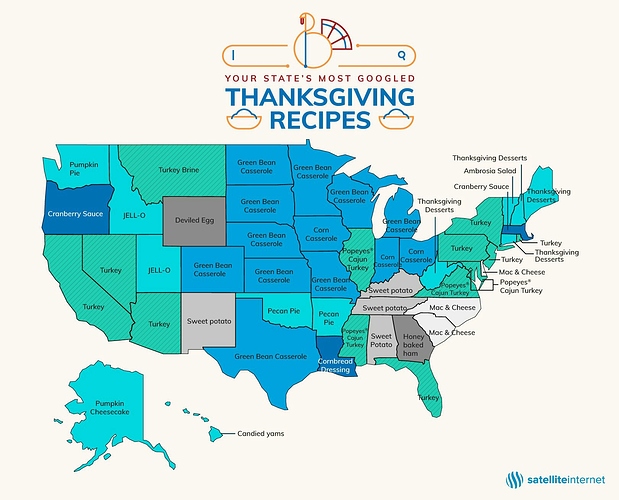 Ok. What is it about Mormons and Jello?

Beats me. Although the 1950s, the heyday of Jell-O, maps very well onto the family lives of conservative Christians I know. The whole brittle “we’re fine, everything is fine, we are good people and there are no problems to talk about beyond a minor car repair and who will take our the trash”, everyone stiffly smiling all the time thing.

What’s up with the Popeyes Cajun Turkey? Have these states given up and are just gonna drive-thru on Thanksgiving?

When I was dating my wife, I was invited over to her Norwegian Grandmother for Thanksgiving. They set out lefse as an appetizer, a thin potato tortilla to be served with brown sugar and butter. Unsure of what to do with it, I poured cranberry sauce on my mine. Many years later, her family still talks about my faux pas.

Alaska: I am intrigued by your ideas and wish to subscribe to your newsletter.

But what surprises some people is that when I was a kid we used to have real candles on the tree.

When I was a kid, we had some candle holders (and candles too I think) that had been passed down, but we put them on the tree without lighting them. Could be my grandfather got them when he was in Germany in the years prior to 1900, studying German. (We still have a number of other things he acquired, e.g., some old pewter beer steins, for example, that are REALLY cool). We never lit the candles because of the fire hazard. I really wonder how many fires resulted from those things?

Edited to add “prior to”

The ultimate hybrid. (Though I must say I once made a pretty good pumpkin pie ice cream).

When you are a little kid growing up in a vaguely Christian household, the day when you bring home and decorate the Christmas tree is always special. Special even if you grow up in a family lke mine. And of course decorating the tree means bringing out items that you only see once a year. Things like the amazing red and green tree stand, the plastic water picher with “NON-POTABLE” written on the side in marker, and of course the Christmas ornaments. We had lousy ornaments, but they seemed special to me — like friends who only visit for the holidays.

But back to process of tree decorating. Hiding in one of the boxes of decorations and lights, was the container of spare ornament hooks. It was just a normal, small, Tupperware-type container filled with bent stainless steel wire hooks. “SPARE HOOKS” was written on the top, in marker. It had never been used for anything else, from what I could tell.

For me opening this box every year was mandatory, even if we didn’t need any extra hooks. Yes, it was a tradition. Because this box of hooks also contained the most horribly bizarre smell you can imagine. What was the origin of this smell? I have no idea. It wasn’t exactly organic, it wasn’t exactly metalic but it was harsh. It wasn’t a smell that slowly crept up on you. This was a smell that punched you in the nose. Slightly sweet, slightly dreadful.

I used to challenge my brother to stick his nose in there and take a good smell. He would not be persuaded. He was a bit like Bert, I was a bit like Ernie.

I can still remember the aroma. I have never encoutered it anywhere else.

Okay, just not really being “Christian” - in the sense that we didn’t go to church, read the Bible (there were a couple in the house), or use the text of same to get people to do things - we still celebrated the major Christian holidays.

Though Mom professed to be a Methodist, one I’d define as “Solitary Eclectic”, lol. My dad had a weird relationship with religion while growing up and during and after WWII (TLTT), so that explains some of it. It was weird.

Though Mom professed to be a Methodist, one I’d define as “Solitary Eclectic”, lol. My dad had a weird relationship with religion while growing up and during and after WWII (TLTT), so that explains some of it. It was weird.

Sounds like mine; my mother was Methodist also. My dad’s family was Unitarian, but I think my dad left the orthodoxy of that religion. We occasionally attended church, mainly when I was a Boy Scout that met in a Methodist church.

All these years, just across the lake from me, people were Googling green bean casserole and corn casserole, and I’d never heard of either until the discussion we had on this very board recently:

For me as a European green bean casserole was one of those things I knew from fiction but where it took me a while to establish whether they are real or just TV tropes.

As far as I can tell, Americans really do eat green bean casserole on Thanksgiving, but they don’t all sit on the same side of their dinner table. One day I will find out if all American children have to build models of the solar system for school.

When I was dating my wife, I was invited over to her Norwegian Grandmother for Thanksgiving. They set out lefse as an appetizer, a thin potato tortilla to be served with brown sugar and butter.

I can still remember the aroma. I have never encoutered it anywhere else.

I would lay underneath the Christmas tree and look up inside it, watching the colorful blinking lights from the inside. We always had artificial trees and they had a weird smell. It was that once a year smell that meant a magical time with a couple of weeks off of school, Christmas specials on TV, and then new toys! I remember that smell, and the way the lights blurred and looked like colorful fireworks with my glasses off.

I still try to lay under the tree sometimes, if the cats leave enough room.

My dad insisted that we have this dish at Thanksgiving. He loved it.

It’s a way to include canned or frozen fruits and/or vegetables in a substance that can be large enough to feed a lot of people and seem festive.

Once upon a time, we weren’t able to get fresh produce all winter long in most of the country. The end of November is the start of that season of scarcity.