Using Firefox’s Element Inspector, mock up the theme that you want to see. Since I’m starting the topic, here’s my take: 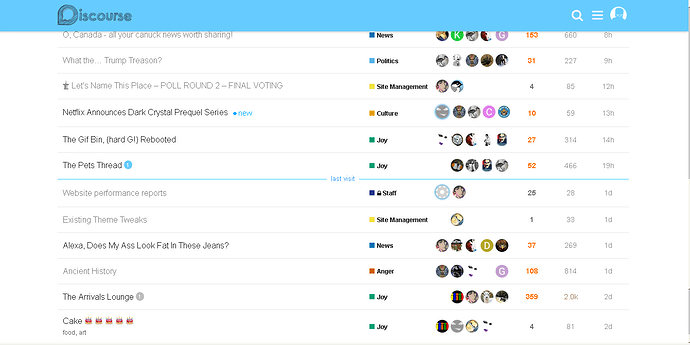 image.png1341×671 88.9 KB
Modified colour scheme that focuses on being bright and blue.

EDIT:
This is not an officially-sanctioned topic, nor does this reflect the opinions of current management. Adding new themes is a concern of mine, and mine alone as a member of the community.

I’m pretty happy with the dark theme. Just waiting for our logo to replace the Discourse one.

I’ll make sure there’s always a dark theme, even if it’s not the default.

The dark theme is pretty decent out-of-the-box. There’s just not much you can really do to the Dark theme to make it feel different. (That’s not necessarily a bad thing)

Actually, how about putting up basic text versions of some of the naming contest names, and rotating between them daily to let people see how they fit up there.

Might push more people off the fence for the naming contest, too!

(Tagging @waetherman, 'cause we’re playing in his stuff

I’ll make sure there’s always a dark theme, even if it’s not the default.

For what it’s worth, I like the black as a default as it’s visually distinct from some other Discourse sites. Less confusion.

(Also, on April the first, we can make the theme black-and-red and really confuse people who have fetlife accounts. 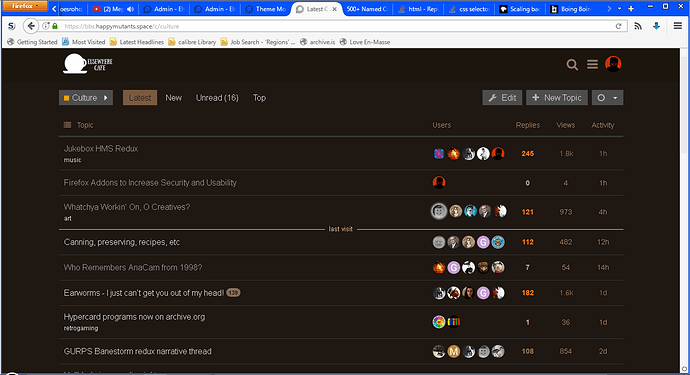 This is Earthtones, a theme I’m working on for use in the hot, bright summer. I’m no colour designer and definitely not an artist. It’s probably three to five iterations from being ready for public testing.

Logo used is taken from the Logo Mockups thread and is subject to change when a final design arrives.

EDIT:
The can be selected from your settings menu if you’d like to test it. I’m field-testing it for usability. No major changes planned for it.

I’m trying it out. My initial impression is that the main brown used for the Reply button, etc, doesn’t provide enough contrast. Can we try a mustard yellow? I like the flame orange color a lot.

I found the link colors hard to read in the sun. Also need to tweak the mobile logo so it doesn’t interfere with replying.

I’m trying it out. My initial impression is that the main brown used for the Reply button, etc, doesn’t provide enough contrast. Can we try a mustard yellow? I like the flame orange color a lot.

Flame orange does complement brows quite nicely. Mustard yellow is a bit harder to pull off but can be attempted.

Made some light changes to some text colours to enhance contrast. Text is readable and the interaction buttons now 50% more visible on direct sunlight.

There’s just not much you can really do to the Dark theme to make it feel different.

The E? I can put up an orb with an E. Did the logo go live across all themes or just Earthtones?

I saw the logo a couple days ago, when I first switched to Earthtones, and when I scrolled down far enough the “Elsewhere Cafe” text went away and the cup got an E emblazoned on it. But today, the cup stays all white.

Edit: yeah, seems like the logo only shows up in Earthtones. But am I crazy, or did the coffee cup used to have an E on it, once the Elsewhere Cafe text isn’t there? (I know the logo has a different name at that point… “favicon” is it?)

It did. I’m redoing it tonight in higher resolution so it doesn’t look as bad on desktop.

Groovy. While you’re at it, did you want to add the thin arc that separates the top of the cup from the… uh… globe, or foamed milk, or whatever it was? The thing @ChickieD mentioned here:

Agreed. I did this in Canva and it’s very limited but fast. I’d like a better version of this and agree the handle should be adjusted. And I’d like a thin line just barely indicating the outline of the cup. Also I want more Edward Gorey vibe to the cup - perhaps if it were more of a dark shade of gray than black that would help.

…or should she build this herself? I admit I haven’t followed the discussion closely this week; been busy.

EDIT:
I’ll add the line (to the main logo) and the E on the smaller one.