So there was a Windows 10 update that rolled in today (for me). Afterward, I noticed that it had changed the ‘Start menu’. Where there used to be an icon to let me log out, lock the PC, or change account settings is now just a file explorer link.

So here’s a secret, in the space above that, black-on-black with no icon, although it’s invisible, there’s a spot that you can click to get to that account menu. In the screenshot below, it’s the slightly lighter grey square next to Notepad. Below that you can see the (now secret, used to be standard) account menu that pops up. 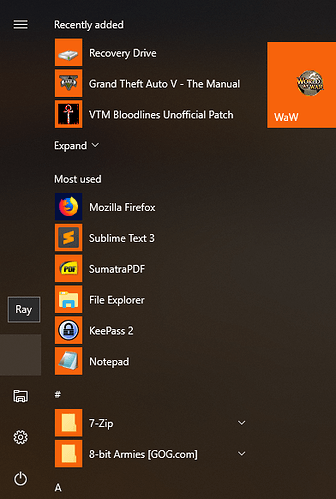 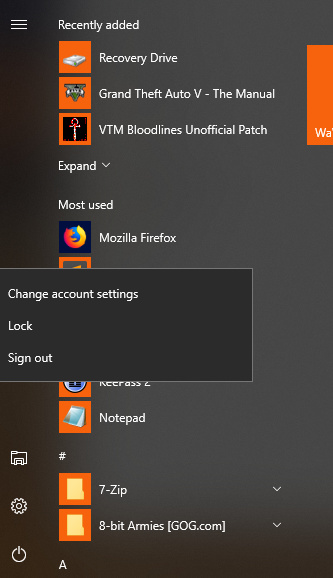 Why did the windows people decide to hide this functionality? I have no idea. But at least it’s still there if you know where to click.

Locking my computer when I step away is something that was drilled into me at work, and then became a habit, just in case anybody’s wondering.

Do you have an icon set for the account? Normally that space shows the account icon (or a generic head/shoulders one). It would be odd for them to hide the icon but leave the mouse target there.

Of course, for locking the computer, I just hit Windows Key + L. Much faster than mousing through the menu.

And if you don’t have a Windows Key, Ctrl-Alt-Del and click “Lock this computer.”

Ctrl+alt+del, immediately followed by hitting return locks the computer and is now a reflexive twitch that’s basically stored in the same muscle memory as my knees flexing in order to stand up.

I blame the company I worked for years ago, that encouraged its employees to sabotage their colleagues’ terminals if they walked away without unlocking, in order to teach everyone a lesson in PC security.

You only need to watch someone work through the stages of “Oh. My desktop is gone. Ah, it turns out it was hugely zoomed in to a blank spot. Oh, it’s upside down. And in photonegative. Oh wait, this was all just a screenshot, saved over my desktop all along. Aaaand now I have to repeat these steps for real, on my actual desktop” before you get really paranoid about it…

You only need to watch someone work through the stages of “Oh. My desktop is gone. Ah, it turns out it was hugely zoomed in to a blank spot. Oh, it’s upside down. And in photonegative. Oh wait, this was all just a screenshot, saved over my desktop all along. Aaaand now I have to repeat these steps for real, on my actual desktop” before you get really paranoid about it…

I worked at an IT Service Desk at a college, staffed mainly by college students.

There was no encouragement from management to sabotage coworkers’ settings. There didn’t need to be.

Let’s just say the sabotage was more… NSFW than you describe.

That should show your MSA picture. It’s not supposed to be invisible like that.

ETA consider filling feedback using Feedback Hub or upvoting an existing feedback for this issue if anybody else has reported it. They take these reports seriously.

The Fall Creators Update has a neat feature called Dynamic Lock where it will automatically lock your screen if you pair your phone via Bluetooth and it goes out of range.

While a neat idea in theory, I dislike the lack of precision for “when is the phone out of range”

If I could specify 2m that would be fine. But as it is, the washroom is within BT range and I bet I could make the coffee machine as well before it would lock.

The group that went to 1703 was only a few hundred. I’m generally happy with my task sequence, I just need to fine tune a couple of things for the VPN only folks. And figure out a weird OneDrive message that pops up on occasion.

I’ve been using Classic Shell since Win 8, which makes it seem more like v.7. The shut off/lock/log off/hibernate is where it’s supposed to be. But as @Nonentity mentioned, windows key L is easiest.

While a neat idea in theory, I dislike the lack of precision for “when is the phone out of range”

While I have no proof of this, it seems like it’s a bit more granular than just “out of range” – it seems to take into account signal strength so when I get more than a few feet away with my phone it immediately locks my screen.

I mean, sure, it’s no substitute for just Win+L’ing your damn machine before walking away but I find it to be a really nice feature.

This really is a “welcome to 2003” feature though – my old Nokia 6620 had the same functionality. Pair it with my computer, and their software would lock my screen when I got far enough away.

I guess being able to just walk away from my computer and have it lock has been a wish-list feature of mine ever since I had that functionality with my old Nokia. A few years back, I threw together an Arduino Micro with an ultrasonic sensor that would send a lock command to my computer when it detected I wasn’t sitting in front of it. Unfortunately I could actually hear the pings of the sensor (or more accurately, noise from the components) and it drove me crazy enough to abandon the project. It was a nice little proof of concept, though.

Arduino Micro with an ultrasonic sensor

hmmmmm. Ultrasonics have never bothered me.

Damn it though I just started playing with my MagPi Voice Kit.

I will have a digital assistant that responds to “IGOR!” (That will randomly quip back “It’s eye-gor, master”)

there was a Windows 10 update that rolled in today

Do you have an icon set for the account?

Aha! I used to have one but for some reason it was gone after the update. I re-added it and that solved it.

The one good thing about the Windows key on the keyboard? Win+L = instant lock. I do it all the time when at work.

And if you don’t have a Windows Key

So hard to find a keyboard these days without one.

Pretty much the only thing I use that key for is locking the screen… I know there’s other shortcuts using it, but I’ve never felt the need. Most of the time it just ends up being accidentally hit when I’m aiming for something else.

[edit] Well, I got curious and looked. It looks like there are a (very) few shortcuts using that key that I may have to remember. Most of them are either things I’ve never needed to do or ones I can do just as easily without the key, though.

The Windows logo key (also known as Windows key, Winkey, start key, logo key, flag key, command key) is a keyboard key which was originally introduced on the Microsoft Natural keyboard in 1994. This key became a standard key on PC keyboards. Tapping this key invokes the operating system's start menu, if it has one. In Windows, Ctrl+Esc performs the same function, in case the keyboard lacks this key. Historically, the addition of two Windows keys and a menu key marked the change from the 101/102-...

Windows+arrow key to snap a window to a position on-screen is very useful if you’ve only got one (16:9) monitor but need to reference information from several different programs at once. I probably use it more than any other keyboard shortcut, come to think of it…

Everything was patched this week.

And then half those patches were pulled and new patches released.

Except when it doesn’t. Like it didn’t earlier today. Well that’s Windows for you.