Following posts will contain changelogs/updates when they occur.

Unsanctioned thread to share mockups of the future site logo What do you want it to look like?

Introducing: Earthtones Industrial Coffee Action Earthtones is an unfinished, but usable theme designed for use outdoors (on mobile) and for high contrast. After around 20 iterations so far, this is what it looks like. [image] Your feedback drives the development of this theme. You can opt into it here to try it out today. Drop your feedback in this topic. What does it do right? How does it feel? What should be changed? notes: Setting per-theme logo and favicons required CSS and mucking…

1 January 2018: New Themes (in development)! I’m happy to unveil two new themes - Aethertones, and Retro. Some changes make occur to these themes. We appreciate any and all feedback. (Unless something goes critically wrong on these themes, no changes are slated for this coming week. I’m off to go drink!) These two join Earthtones as our unique, community-developed themes. To change your theme, access your control panel by clicking on your avatar in the top right. Then click Preferences. From…

2019 March 04
• Added pronouns field in profile. This will show in mini-profile, too!
To set your field, go to the user control panel, and then profile 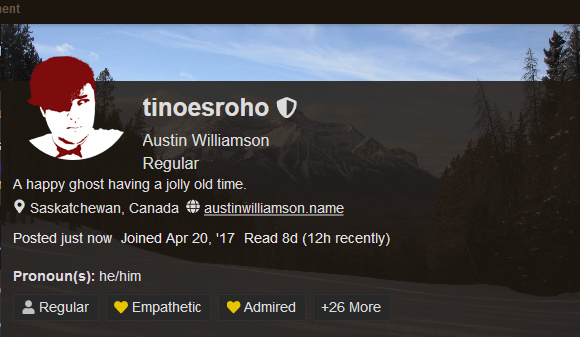 A great idea! Thanks!

Did you code the Pronoun field yourself, or use a plugin? Ken’s considering it at the BBS, and if it’s a plugin, I’d like to point him to it without bringing up this site.

Edit: Ken doesn’t seem to favor the idea, because he’s not sure the BBS should hold onto a lot of data that could be used to identify posters. Given the government we’ve got now, I can’t say he’s wrong to worry about that. Oh well.

I messaged him and here is part of his response.

If the changes can be performed by an official plugin or a customization we have access to, then they can be considered. But if it’s something hacked into another instance, we won’t be able to support it.

(and that’s aside the question of whether or not we want the responsibility to have that data, which isn’t a settled question but I pinged @doctorow for some advice on that front)

Ken’s a pretty good egg, most of the time, and I respect how he’s considering the protection of users’ data. So I’m okay with his answer. And I really don’t want to push anything with him right now, since the latest stealth-troll nonsense has his feathers ruffled.

Yes, I’m butting out. He seems to be feeling the strain, even to the point of wondering if he should continue as a mod. Can’t blame him.

I PM’d him just in case he wasn’t aware of the way it was handled here (I’m pretty sure he knows about the existence of the site).

I feel for him too. It’s ridiculous that he’s the only full-time moderator on a site that huge. He needs help, more than just regulars and leaders can give via flagging.

It’s part of the custom field feature, accessible under /admin/profile, i believe. It allows the creation of any number of custom data fields and whether to display only on full bio or whether to show on tap bios.

@Nightflyer and @tinoesroho thanks for trying here. I kind of gave up on the thread after the push back and some the misunderstanding going on there.

He needs help, more than just regulars and leaders can give via flagging.

I agree. I understand the desire to protect data and the lack of money to pay anybody, but it’s frustrating because you just can’t effectively run a community that big single handedly.

I’m not sure if the larger logo is better or not. On mobile, it seems to be fine, though 4em does look a tad big on my desktop.

Because svg scaling looks weird, especially with straight lines, I’m contemplating testing a version where the border is not present in the image, but is instead added by css. This would have the same effect as present, but theoretically more neat.

2021 August 18
Added an in-testing basic colour-shifted theme - AMOLED Dark, for use on mobile phones. Uses ever-so-slightly less power. When I locate my e-reader, I’ll start work on an eReader-tweaked theme.