With a lot of discussions lately, a repeated refrain is “a product of [their] times” and “that’s how it was, then”. And tt’s easy to dismiss that as just an excuse (because it is), but there is a ring of truth in those statements.

The media we grow up with shapes us. Songs, television shows, movies – things we find in them are all things that not just one person thought were okay to say out loud, but an entire industry and buying public were fine with.

A lot of it was not fine. This is a thread for highlighting the things we grew up with that have stuck around (if only in the background), or pop up occasionally. Mainstream things that no one questioned, or if they did question them they got mocked as a killjoy. Things we should look at and question.

So, what are the songs/shows/films/stories that you grew up with – sang along to, quoted, recorded – that now you change the channel when you see/hear it? What are the old hits you remember that now you realise are so, incredibly skeevy?

ETA: given the topic, note that there is a blanket trigger warning on anything within. This is about facing problematic media and recognising it for what it is. Proceed at your own risk.

ETA #2: Given the nature of the topic, “likes” do not necessarily signal approval of the media, but a recognition of the validity of the choice to include it.

What are the old hits you remember that now you realise are so, incredibly skeevy?

In the '80s in Canada, we heard Gino Vannelli a lot. Lately, he’s been doing one of those old-timer tours of casinos and such, and in a recent interview talked about how he was doing mostly fan-favourite songs. Two of his cause me to change the station the moment I know it’s on, and yes, they still get airplay today.

Well, I know a lot of people get seriously triggered by classic Saturday morning cartoons, because they’re ridiculously violent and offensive in terms of stereotypes, but I still miss seeing them on TV:

I had one of these when I was a kid… 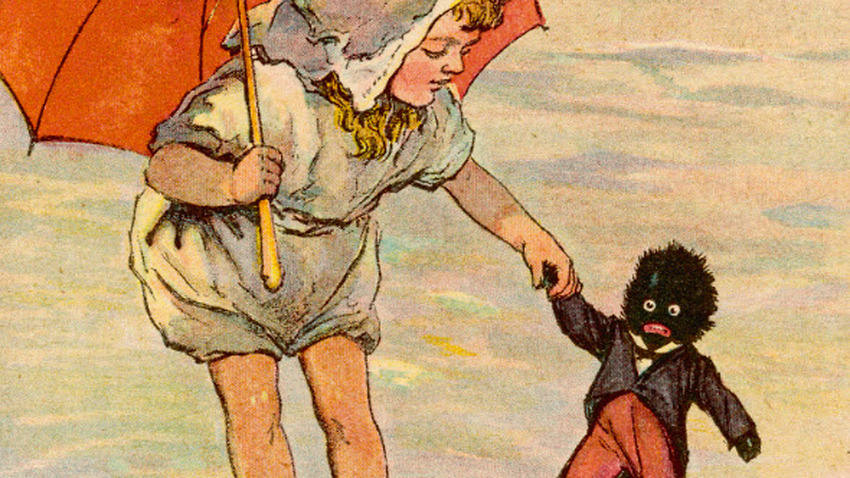 Golliwog: Harmless doll or symbol of racist past?

A Sydney shop has stopped selling Golliwog dolls after an online petition put pressure on the store to remove them. Some claim the dolls are offensive to people of colour while others say they are nothing more than a harmless toy. SBS takes a look at...

So many songs from bands that promoted the idea that women are evil, scheming witches. Bad Company, ELO, Eagles, etc. Just too many to mention.

One of the pictures I found that I hope won’t trigger. 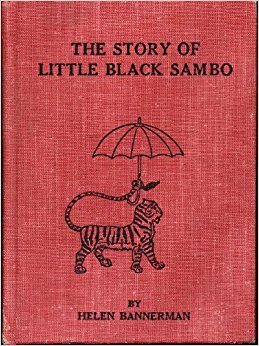 This and the Wizard of Oz were my favorites when I was a kid (pre-kindergarten).
I just don’t know what I’d do if I had kids who discovered it out in the world. Deny its existence? Forbid them to read it? Knowing kids, they’d read it because I forbid it. Would it hurt to explore it together and have a serious discussion about racism and how people are unfairly portrayed in the media? My gut tells me the latter would be best. Is my gut instinct correct?

I believe it is. That’s how they should read Huckleberry Finn as well: with guidance.

I know the basic story, but I have no clear memory of reading Little Black Sambo. I’ve heard it said that it’s really the original illustrations that are problematic, not so much the words. (Except of course, that “Sambo” is now racist.) What’s your take on this?

There aren’t that many things that I loved as a dumb ignorant kid that make me cringe to the point of changing the channel. Even Van Halen’s pretty indefensible “Hot for Teacher” is still a song that gets my toes a-tappin’ and my fingers drumming on the steering wheel. I won’t try to defend its music video either, except for what it subjectively means to me.

It’s a Bad Thing, this video, and so is the song itself. And yet, somehow I still value it. The reprehensible messages it communicated were not what stuck with me all these years. There was a joy, a freedom, a rebellious upswelling of rich, sun-drenched California life that rose from that song. For all the damage that song and that video might have done to the young people who consumed it and absorbed the message that women and girls are to be ogled and judged and consumed by the horny boys (even the woefully age-inappropriate ones)… somehow that message was rejected by me. I don’t ogle girls. I’ve never actually lusted after a teacher. But so many aspects of that song and its video, aspects that largely exclude the egregious sexism, now represent to me a surprisingly vivid slice of my own middle-school years. I was 14 when this song came out, a grade or two older than most of the kids in the video. I don’t have to perform this song for anyone else. I don’t feel the urge to share the video with my kids, even if I do give my son a stern “Sit down, Waldo!” when he takes too long getting in the car. But now the song lives in my Guilty Pleasures folder, and I rock out to it in the car at every opportunity.

'Cause as lyrically and thematically terrible as the song is… it truly rocks my socks off. And apparently always will.

Yes, the images in LBS are at the same time crude and artistic. Sambo is represented as a very dark-skinned south Indian boy who loves pancakes and butter (ghee). Sent out into the jungle, he encounters four tigers willing to forgo eating him in trade for his new shoes, umbrella, jacket, and pants. They argue over who is best dressed and chase each other around a tree so fast they turn into a stream of butter.
Many counterfeiters reprinted the book with a different representation…a young African-American boy from plantation life. Langston Hughes criticized it in 1932 for being another “pickaninny” book.

Well, these days it is kinda easy to notice that MST3K was more than a tad homophobic. Perhaps no more than the culture of the time, but their treatment of Tommy Kirk in Village of the Giants is noticeably cruel.

Wild Horses which is a straight up rape song

YES! I have been telling people this for years, and they just look confused and confess they’ve never listened to any lyrics besides the hook.

When I was first getting into chapter books, the library we went to most frequently had a whole set of the Uncle Remus books. I read every single freakin’ one. I loved those books. I’m not sure why they were still on the shelves and why my parents just let me read them without any comment that I recall, but I’m kind of sad that they aren’t really in anymore because it was such a big thing for me to read the whole set as a brand new reader. But yeah, those aren’t ok.

I have a pattern for knitting a golliwog in one of my grandmother’s old pattern books. I was especially gobsmacked about it because my grandparents were very pro-civil rights and would get into the face of anyone who said anything racist while they were within earshot.

I’ve got close to throwing it out a few times, but her favourite charity patterns are in the same book (published in the late 70s). For now I’ve decided it’s a reminder of how easily casual racism slips into things.

Wild Horses which is a straight up rape song:

For a minute, I though you were talking about the Rolling Stones song.

I’m not sure exactly what it’s about, but it doesn’t sound like it’s about rape.

There are several songs on Weird Al’s Album Running With Scissors that now make me uncomfortable - especially “Jerry Springer.”

This is sadly still going on, but I’m really tired of gay and trans people being used as punch lines. Saturday Night Live is the worst about this.

…That’s pretty much what I’m talking about in Running With Scissors.