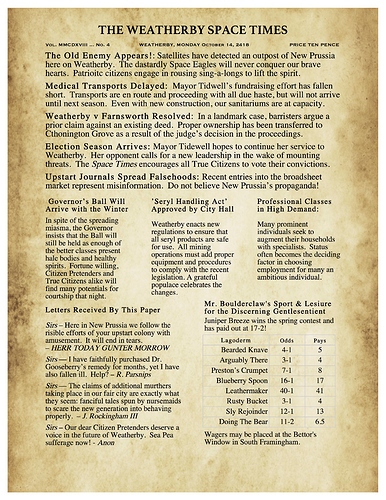 The plague continues to make inroads among Weatherby’s finest. One can only imagine the toll it must take in the less fashionable neighborhoods. Although Mayor Tidewell’s funding initiative has fallen short, several medical barges continue to proceed toward Weatherby at flank speed hoping to arrive in time to prevent the most catastrophic outcome.

The barristers of summer have been hard at work analyzing sketchy agreements regarding the sale of recent tracts only to discover via the archives that other households may have a prior legal claim. The landmark case of Weatherby v. Farnsworth will likely prove instrumental in resolving future disputes. One may certainly surmise that they will continue to work with all possible vigor in resolving any remaining controversies as to the provenance of these tracts.

Games of polo, badminton, and croquet are played with enthusiastic vigor, and the subsequent injuries suggest that the current rules may need to be revised to secure the safety of future players. For the moment, the cuts and bruises resulting from spirited play are worn as badges of honor.

With the Governor committing to next season’s cotillion, all those with wards should make sure to be extra prepared in advance!

[GM Note: as always, please bring any discrepancies you may notice in my bookkeeping to my attention and I shall endeavor to resolve them with all due haste.]

Player database: read-only view of all players for the spreadsheet-inclined

* Note: Holdings listed as ‘Sketchy’ may have had contracts improperly drawn up and be subject to legal risk. To be fair, there was an awful lot of fine print.

Player database: read-only view of all players for the spreadsheet-inclined

* Note: Holdings listed as ‘Sketchy’ may have had contracts improperly drawn up and be subject to legal risk. To be fair, there was an awful lot of fine print.

The rank penalty remains secret, even though the subterfuge may be publicly intuited by other members of Leviathan’s. With regards to attending social functions, the rest of Weatherby remains unaware of any deception.

Yeah I remain totally confused as always. My brain just can’t keep up with this many variables. Here’s to a good story and letting someone else figure out the numbers.

I missed my results because I appear to be under ghoti?

Might I enquire what the mayor appears to be doing with our donations, since she isn’t returning them?

There’s another problem. Without < pleasing hum >'s contribution, we’ve only collected 1649£. We’ve fallen short of our goal, and will find no respite from the plague.

I missed my results because I appear to be under ghoti?

Might I enquire what the mayor appears to be doing with our donations, since she isn’t returning them?

The mayor has funded the relief mission to the best of her ability with the donations that were collected. As such, the donations have been committed to the mission but the ships will not arrive this season as expected as it was both underfunded and unlucky.

There’s another problem. Without <pleasing hum>'s contribution, we’ve only collected 1649£. We’ve fallen short of our goal, and will find no respite from the plague.

The medical barges are en route and expected to arrive next turn as they are doing the best they can with the resources that were made available.

Bah! This [cough, cough, cough] infection is worse, and that spot of trouble down at the mines, has worsened too. The miners want some ridiculous “health insurance” of some sort. How can I take care of their health when my own is failing?

Igor. IGOR!!! Your mother’s medicine will have to wait, as will my tea cozy. Southpaw ran the wrong direction around the track entirely. Now bring me the Hobbman’s Guide to Xenobiotic Gene Insertion and a hot cup of tea. And tuck the blanket under my feet.

Duchess @gwwar, I do apologize for that birdie to the ol’ bean. But, may I say, you are looking most PLUCKy this fine day! My best thoughts for your swift recovery.

“Surprises are foolish things. The pleasure is not enhanced, and the inconvenience is often considerable.”

As the barges from Britannia Prime labour toward Weatherby at flank speed, an eager and increasingly desperate populace looks to the stars with a hope that refuses to be extinguished. The sudden and unexpected appearance of the forces of New Prussia cause any number of conversations to turn to darker remembrances and ruminations.

Turn 4 plague progress: For healthy individuals: Lousy chance of a decline in health that would likely be moderate. Average chance for any existing condition to either improve or worsen.
Turn 4 risks: Lousy chance for any ‘sketchy’ tract to be contested in court by Weatherby’s Barristers. Contested deeds have an Average chance of being resolved in favor of the current owner, otherwise prior claims are discovered by the courts and ownership of the tract will be transferred to a random household.
Turn 4 rewards: Average chance to see a modest improvement to one’s own capabilities.

Choose only one of the following options as well as how much you wish to invest in that option. Greater investments results in greater economies of scale. A higher relevant stat will further improve outcomes, but to a lesser extent than the size of the investment. For example:

Option 1: Buy War Bonds: Although the situation with New Prussia remains unknown, the old guard has taken up the cause of selling bonds to modernize the existing Weatherby regiments.

Option 3: Invest in shares in an offworld shipping company: With some elements pushing for Weatherbean independence, shipping shares have seen a sudden resurgence in value.

Optional: Votes must be cast via private message to @bartlebot and can be submitted without rank penalty. Your vote shall carry your current rank weight, e.g. a rank of 300 delivers 300 votes to the final tally. The candidate receiving the largest number of votes will be the acting mayor starting next turn.

Optional: One may choose to wager on this season’s Lagoderm race. Merely select a promising creature from the Sports & Leisure section and also indicate the size of the wager. Example:

Optional: Specific professionals may become available for hire from turn to turn. As long as they continue to be paid a salary, they will serve you to the best of their abilities. Only a certain number of professionals will be available per turn. Availability is not guaranteed from turn to turn. In the event that more individuals want to hire a specific profession than is available, those of highest RANK will be served first. Example

The following individuals are available this turn:

Optional: One may procure personal quarters within the city at the current market rate. Any change of quarters comes with an additional 25£ fee for moving services. Each improvement represents a move to a better neighborhood with a more impressive address. Example:

As more members of Leviathan’s move into upscale districts, doors are opened into even more impressive neighborhoods.

Optional: One may purchase various items to enhance ones abilities in various aspects. These items will change from season to season depending on current fashions and availability. Purchases of the same object beyond the first will have no further effect. What on earth would one do with two monocles?

Although it appears none is needed, a brief reminder to use the Public Ledger to establish your intentions for this season.

Requirements: Currently own shares in a shipping concern.

I must ask, sir, as somewhat of an entrepreneur myself: I myself own an import/export business; would this fall under the category of “shipping concern” for purposes of assisting with the medical relief? If so, I would be happy to help.

And, although I intend to retain the most excellent services of my physician for another season, what would I write into the ledger if I was no longer in need of his care? And, out of curiosity, would this liberate the good doctor for hiring by another influential citizen?

Owning shares in an import/export business makes option 2 available to your redoubtable self as well as to the others in that line of investment, namely Cmdr William T. Piker (@fintastic) and Lt. Erythro Brummell (ret) (@daneel) and no others.

One will retain any professional through the duration of this season for which they were hired, but should you wish to discontinue services merely submit the order:

Thank you, kind sir. That information is both helpful and appreciated.

A ruling from on high would be appreciated.

I appar to be missing the obvious. Which stat is associated with which investment?

Investment options updated with relevant stats. Thank you for catching that!

At this point in time, a Barrister on retainer can:

Legal resolution of any sketchy tract, either in favor of the plaintiff or the defendant, will cause the tract to lose the ‘sketchy’ status. 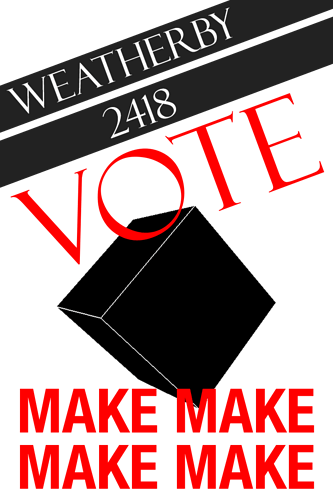 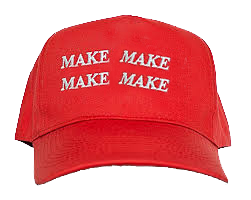 Have I missed the candidate debates? They must have something to say!