RIP. Don't let the door hit where you split 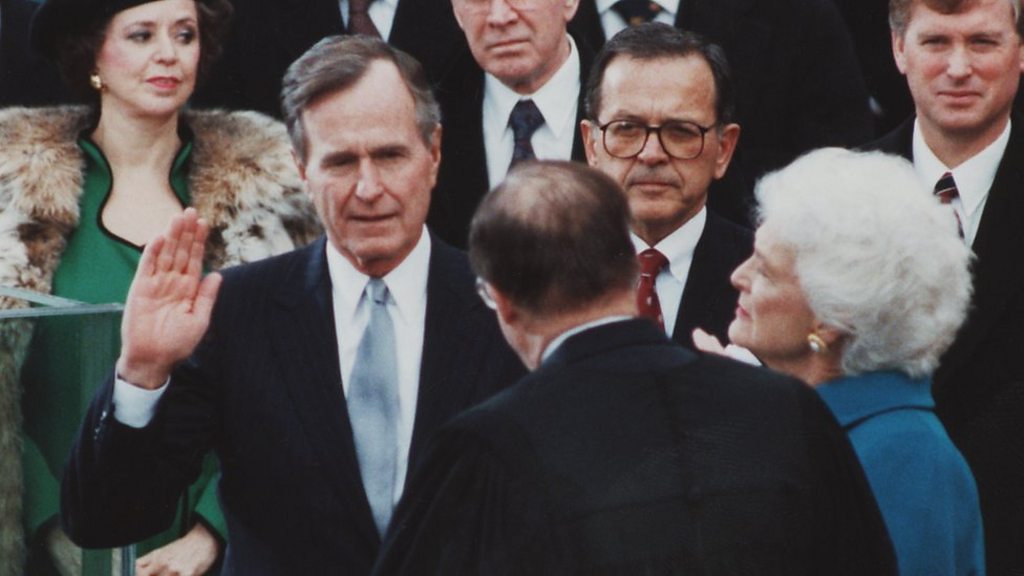 The former US president died on Friday at the age of 94 at home in Houston, Texas.

Oh, but he “regrets” the Willie Horton ad. He must be a good guy!

former director of the CIA.
this motherfucker was dirty as hell.
he had a bad habit of picking the most ruthless local to strangle a population for the gain of US interests, only for his operative to later go rogue, necessitating warfare as president.
Not that it mattered one bit, that just made money for the war industry.
Getting Noriega to heel was just an opportunity to test our new stealth aircraft. They were flawed, the sights didn’t work. Whole neighborhoods of civilians bombed, covered up by using bulldozers to make mass “graves.”
Going after Hussein didn’t work out for him or Junior. Hell, we’re still there.
These are men he personally installed.
As an atheist, Bush is particularly bothersome. An evil man who was nothing but rewarded for being a greedy death merchant in life. There will be no supernatural afterlife where he is punished. He got off scott free and lived an extraordinarily comfortable life. He oughta been curb-stomped, him and his idiot son.

former director of the CIA.

1988, Smothers Brothers Reunion Show. Pat Paulsen had this to say about GHWB:

former director of the CIA.
this motherfucker was dirty as hell.

Supposedly Bush claimed he couldn’t remember where he was when Kennedy was shot. An event so powerful, it’s been used to help people recover from amnesia.

I’ve even heard conspiracy theories that he arranged/contributed to arranging Kennedy’s assassination. 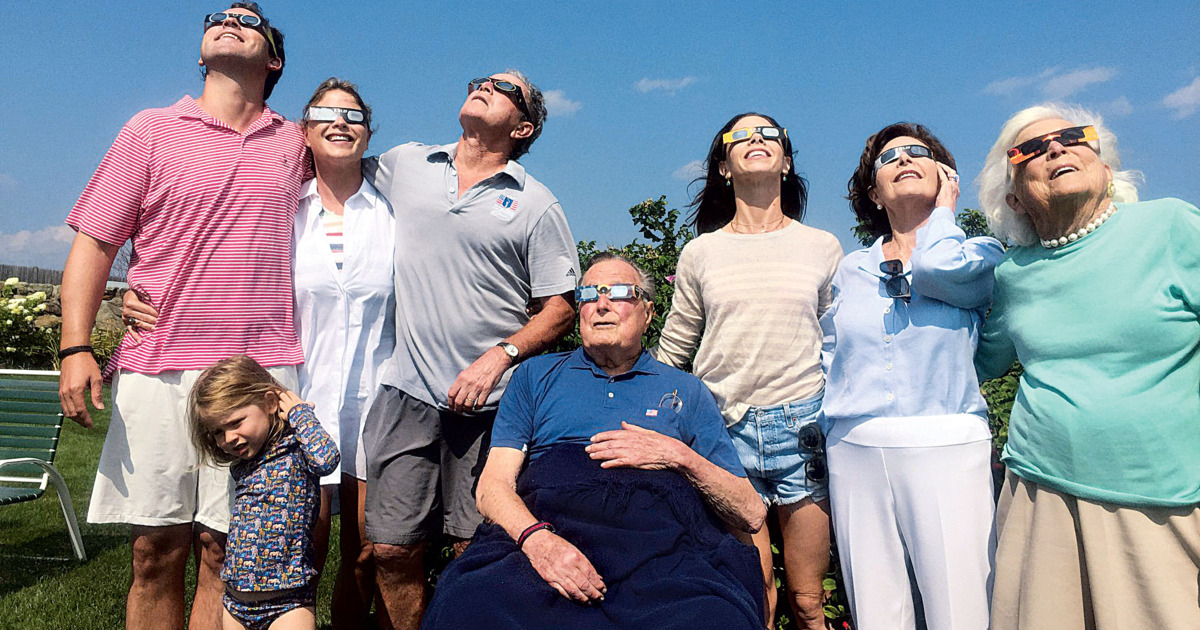 Liberals developed a sweet spot for two presidents they once viewed as villains. Why?

And according to this article which may well fall into hagiography,

Bush himself privately thought the offer from President Gerald Ford to lead the CIA was an effort to bury his political career, according to his published letters quoted in Tim Weiner’s history of the agency, Legacy of Ashes. Bush had been on the short list to be Ford’s vice president. Taking over a secret intelligence organization mired in scandal was not the smartest way to re-enter national politics in late '70s America.

so I guess I fall into the category of people who believe that “it is useful for the political and military leadership to base their decisions on what foreign nationals actively wish to conceal.”

Now, I don’t really know whether that sort of mission can be divorced from the litany of abuses detailed in the church committee report, but it’s the task of CIA director to try. And CIA directors are best judged not on their willingness to try, but on whether they actually do so.

It’s better to point to an example of CIA malfeasance that occurred under his leadership, and judge him on that.

On a related note: people like to blame the CIA for the Iraq War, but the GWB administration didn’t trust the CIA to deliver the goods, and Cheney and Company cut the Analysis departments out the loop.

If the CIA were a policy-advising arm of the government with an organizational structure that kept democratic ideals and oversight as its core mission, that would be one thing. The shit they were gearing back up for in the 70s after Watergate, that they executed in the 80s, was some delusional-Ayn-Rand-adventures-killin-the-poors-level of depraved shit. That was a whole other thing entirely. Iraq. Iran. Korea. Etc. It’s a good goddamned thing that China developed quickly enough to stand up to this family of scumbags.

Of couse, the Chinese establishment looks at the Bushes as a model. Like every new large developing country, they do the same thing as the last one but shittier and so much more. When Africa gets going on this 20 years from now Chinese goods will have the sheen of desirablity that Korean goods are gaining now. And the Party will sell everything off to the rich families so that the officials will also get to be part the post-libertarian global genocide.

But that’s down the road a bit, a road cleared by the Bushes and paved with the dead.

For some time I have been disturbed by the way CIA has been diverted from its original assignment. It has become an operational and at times a policy-making arm of the Government. This has led to trouble and may have compounded our difficulties in several explosive areas.

I never had any thought that when I set up the CIA that it would be injected into peacetime cloak and dagger operations. Some of the complications and embarrassment I think we have experienced are in part attributable to the fact that this quiet intelligence arm of the President has been so removed from its intended role that it is being interpreted as a symbol of sinister and mysterious foreign intrigue—and a subject for cold war enemy propaganda.

With all the nonsense put out by Communist propaganda about “Yankee imperialism,” “exploitive capitalism,” “war-mongering,” “monopolists,” in their name-calling assault on the West, the last thing we needed was for the CIA to be seized upon as something akin to a subverting influence in the affairs of other people.

I well knew the first temporary director of the CIA, Adm. Souers, and the later permanent directors of the CIA, Gen. Hoyt Vandenberg and Allen Dulles. These were men of the highest character, patriotism and integrity—and I assume this is true of all those who continue in charge.

But there are now some searching questions that need to be answered. I, therefore, would like to see the CIA be restored to its original assignment as the intelligence arm of the President, and that whatever else it can properly perform in that special field—and that its operational duties be terminated or properly used elsewhere.

We have grown up as a nation, respected for our free institutions and for our ability to maintain a free and open society. There is something about the way the CIA has been functioning that is casting a shadow over our historic position and I feel that we need to correct it. 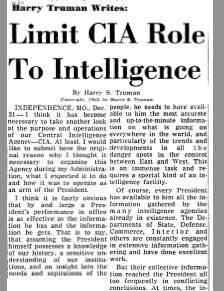 people like to blame the CIA for the Iraq War, but the GWB administration didn’t trust the CIA to deliver the goods, and Cheney and Company cut the Analysis departments out the loop.

Are they blaming them for that last-minute stuff or for previously supporting Hussein and before that putting him in power back in the early 60s? I think the war that’s been going on since 1990 is pretty much entirely a scam/game/plaything of the Bushes and friends, but how that ties into the setup from the previous 30 years is a little confusing.

It’s like nobody remembers the horrors of the two Bush presidencies.

I mean as human beings I’d take either Bush Sr. or Bush the Lesser over Trump any day of the week. Most everything I’ve read through the years paint both of them as actually nice and decent people. But, as politicians, they were awful and went against the large majority of my personal beliefs in irreconcilable ways. Just because they had some policies that are downright progressive compared to the shit were seeing these days doesn’t negate or forgive all the awful things they did.

Being less of a horrible person than Trump shouldn’t be some sort of high bar to meet.

So, whatever. An old dude that was a horrible president but otherwise seemingly decent guy died. That is too bad but I won’t celebrate it or shed any tears. It’s just another day. When Trump kicks it, I’ll be dancing in the street.

When Trump kicks it, I’ll be dancing in the street.

And I just had a vision almost like a prophecy
I know, it sounds truly crazy
And true, the vision’s hazy
But I swear someday there’ll be
A celebration throughout Oz
That’s all to do…
With me!

RIP. Don’t let the door hit where you split

I’ve been reading the title of this topic as “when you split.”

I hated GW’s presidency. I was in college when he was in the White House. What a horrible son of a bitch. I have no fucks to give over his death. The only nice thing I can say about him is that I think my grandfather was one of the Thousand Points of Light but I cannot confirm it as there is no list; I do believe that they never actually gave out even a thousand, which is just so typical. I mean, seriously, you couldn’t find 1000 worthy people to write some official letter from the WH designating you as a Point of Light?

The only nice thing I can say about him is that I think my grandfather was one of the Thousand Points of Light but I cannot confirm it as there is no list; I

gag me with a fucking spoon

Wait, Trumpy finally got invited to one?