Premise
This iteration of forum game has been inspired by the works of Jane Austen and indelicately shoehorned into a space opera. Your character will be a citizen of a colony world in the outer reaches of Charybdis establishing your reputation among the better classes and striving to improve your station with respect to society in general and your peers specifically.

The flavor and themes will borrow heavily from the history and daily life from our Earth’s England across the whole of the 19th century - but deep familiarity with the period is absolutely not required. Period scholars, fans of Jane Austen, and those who just think monocles are nifty are equally welcome. No previous experience in these sorts of games is required and any previous experience will not offer any sort of advantage.

Game Background
King Grigori has decreed that a new colony world will be established in the Weatherby system. Sentients of all classes are invited to apply for a berth on an outbound colony ship and entry into the Weatherby citizenship lottery. As society on Britannia Prime has become uncomfortably static with little opportunity for advancement, colony citizenship presents a remarkable opportunity for advancement in this era and your parents have chosen to risk life in the colonies.

The empire has decided that birth gender and birth species are clumsy ways to establish the right to own property and titles and such outcomes should be based on true randomness rather than clumsy genetic fumbling. As such, all potential colonists are designated as True Citizens or as Citizen-Pretenders based on a coin toss to make things as fair as possible.

Space historians have remarked at length on the unusual fact that a space faring empire had chosen to base its society on the antiquated mores and styles exemplified in a 19th century Earth novel. But as with all empires, who can argue with results?

GM Note: additional worldbuilding background will be posted as time permits prior to game start.

Player Requirements
Traditionally, the time commitment for this sort of game is about 15-20 minutes per week - but I suspect this iteration will ask a bit more from the players in terms of interaction. Orders can certainly be submitted with a 15-20 minute commitment, but the public and private interaction between the players will be center stage on this outing.

Role playing is strongly encouraged but not required. You will be in charge of forging your own narrative in a sea of player-driven collaborative storytelling. Player orders for the turn will be submitted to a bot account either via public forum post or privately via PM. A day before the turn deadline, the bot account will cheerfully remind you if you haven’t yet submitted orders for the turn.

Game Schedule
Registration will remain open until Sun Feb 11 at 8pm EST. First turn will be posted by Mon Feb 12 at 8pm EST. Turns are due every Friday by 10pm EST. I’ll use the weekend to compute the results, and a new turn will be posted every Monday evening. The game is expected to run for 10-12 weeks with a two week intermission in the middle.

Turns 1-6 will run from Mon Feb 12 through Fri Mar 23. The game will have an intermission starting Fri Mar 30, as I will be out of the country and without internet for two weeks. Play will resume on Mon Mar 16 and will run to completion at that point.

Player Registration
Your family has spent a number of years establishing itself as a Name of Importance on the colony world of Weatherby. As a designated True Citizen of Weatherby and as the heir to your family estate, you’ve entered the well-appointed offices of the Harcourt Historical Society (Weatherby chapter) to ensure your vital information is captured correctly. The Robo-scrivener has lifted its laser stylus in ancipation of recording your information in the first edition of Harcourt’s Handbook to the Titled, Landed, and Official Classes of the Weatherby System. You mop your brow and clear your throat in anticipation of answering these Very Official Questions.

GM Note: Question 6 is intended as an advanced role-playing challenge. Having no wards will not disadvantage a player in any way, so feel free to leave Question 6 blank. Choosing to have one (or more!) wards will be a significant role-playing challenge, will involve at least double the time commitment per week, and is only recommended for players looking for additional complexity. Choosing to have a one (or more!) wards will make for a challenging self-handicap. If you have any concerns about answering Question 6, please PM me directly or leave it blank.

In the event you might be wondering what this is all about, the pre-game announcement may help answer some questions. If you’re left with questions, please PM me directly! 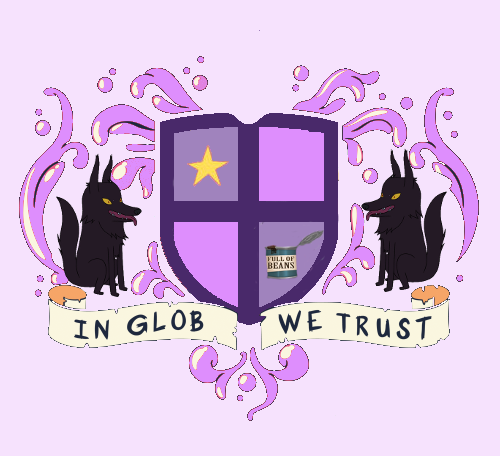 Space Griffin:
While Charybdian records (flatteringly, I must admit, given the prominence in Terran mythology and heraldry) refer to our species as “Space Griffins,” our native name is the Taaa’keeen. Basic xenobiological, cultural, and historical information should be present in the Royal Charybdis Library or that of the Harcourt Historical Society; any supplemental information will, of course, be provided on request (although I must beg indulgence for time to requisition said documentation from the Taaa’keeen Embassy and translate it from Keeen’arrr).

[[OOC Note: I could so easily cheat at this (hint: see avatar), but I’m going to take the time to do this properly at some later point, so consider this a placeholder:]]
Due to an unfortunate happenstance for which the responsible servants have already been appropriately punished, all easily-portable copies of the St-Patrick-Hartbrooke coat of arms were recently destroyed in a fire, but preparations are already underway to replace these and provide them to your esteemed institution at the earliest possible moment. With my apologies, all that I can currently offer is the blazon of the St-Patrick-Hartbrooke arms:
Quarterly 1 and 4 Azure, a cross moline Or; 2 and 3 Vert, a hart’s head cabossed Argent.

Unfortunately, I have not yet been given the honour of being entrusted with the unparalleled responsibility of having the wellbeing and upbringing of a ward from the ranks of the less-blessed among us placed into my care. 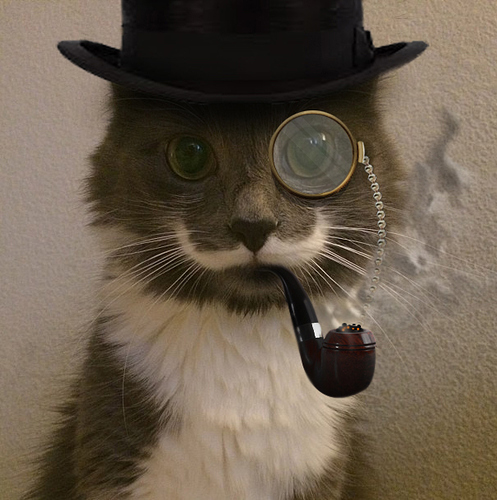 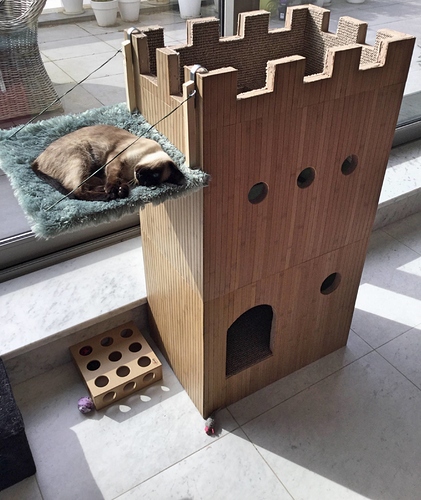 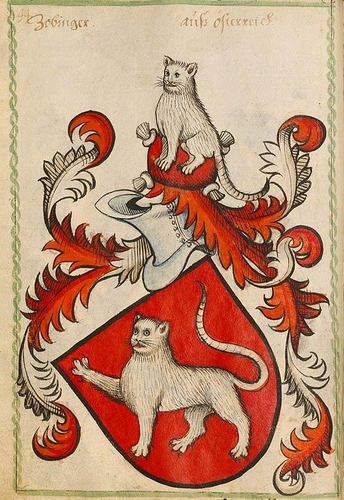 May I introduce Richard Oomingmak Ticklebot Liversnaps-Grayson, my ward, my faithful companion, and a master of disguise to boot. 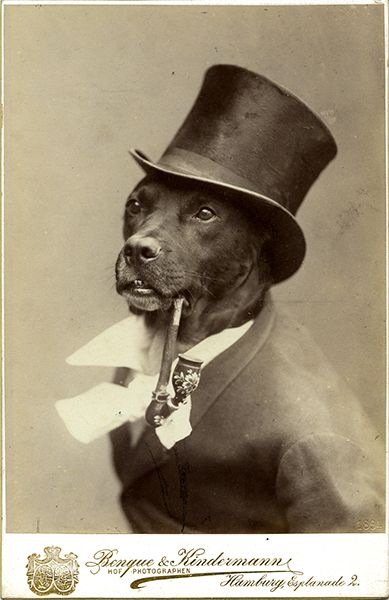 He’s, ummmmmmm, some sort of Space Hound or other. Well, today he is, anyway. Who knows what he’ll be tomorrow! 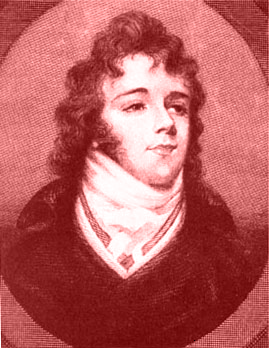 As a duly appointed representative of the Harcourt Historical Society, it is my distinct pleasure to inform you that you have been approved for inclusion in the first edition of Harcourt’s Handbook to the Titled, Landed, and Official Classes of the Weatherby System."

“I am further pleased to inform you that you have also been elected to Leviathan’s as a full member and invite you to pay a visit to the club at your earliest convenience.” 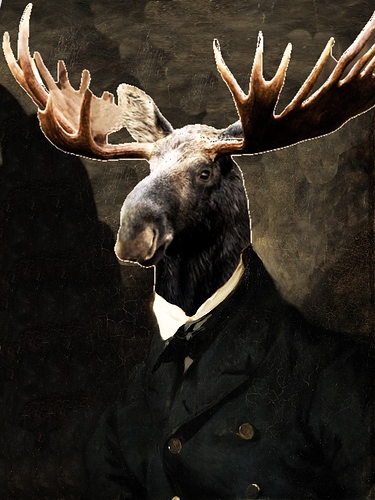 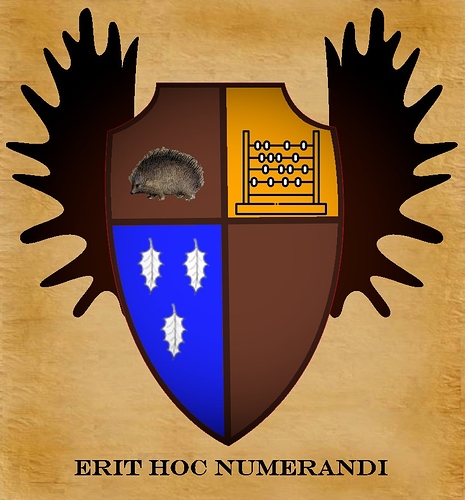 “This will be counted,” Indeed.

A moose after my own soul.

I am Olivier Richard Pierre Jean-Robèrt Sylvain, but please. Call me Liv.

But you can rest assured, your esteemed scrivener, that I am not the troublesome young man I once was.

Yes, of course, as soon as I retrieve a copy. I am afraid that some of my luggage was lost in transit, and the remaining copies are in the Hall, which is still being cleaned after that regrettable… incident. I am still rather devastated, you must understand.

] Other, please specify in excruciating detail

I graduated from Starfish Academy, 8th in my class. Since then, I’ve served various ranks in the United Federation of Oceans and Seas (UFOS), and for the last 5 years I’ve served as First Officer on the Starship Elverprise. 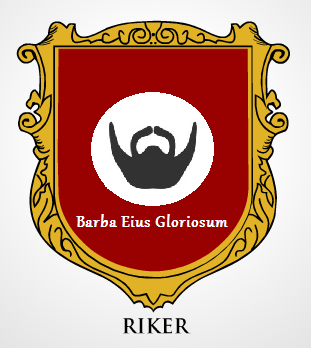 Quarterly 1 and 4 Azure, a cross moline Or; 2 and 3 Vert, a hart’s head cabossed Argent.

To the Registrar of the Harcourt Historical Society,

This is an addendum to my previous correspondence of Jan. 26.

Please find attached a copy of the St-Patrick-Hartbrooke coat of arms.

I apologize once again for its regrettable absence in my initial submission, and assure you once again that those responsible have been disciplined appropriately. However, thanks to the diligent work of a local Citizen-Pretender artisan, an acceptable facsimile has been created from the blazon previously supplied.

Thank you for your patient and diligent work in your essential task of compiling the biographical information of the True Citizenry of Weatherby.

I look forward with great anticipation to your forthcoming Handbook. 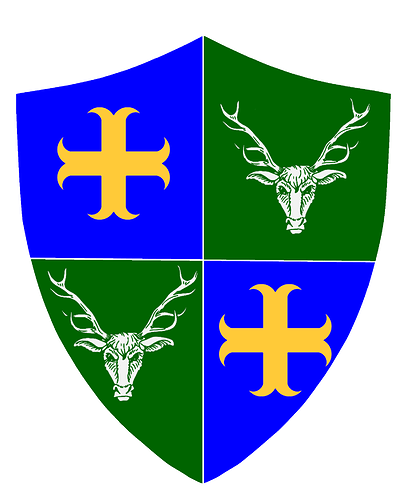 Space Orisha but I appear as a human, usually. I only ever inhabit the bodies of those who call upon me, you will have my word on that as a gentlecreature, scholar and a space pagan.

I confess I do not regret that I was expelled from this exclusive seat of privileged indolence, purportedly for misconduct of a prevaricative nature. In my defense, how was I to ascertain that such behavior was frowned upon by the begowned masters at the head when they themselves partook so freely of this vice themselves? I rather suspect though, that my banishment was in truth on account of my exhuberant, and yes, sometimes furious, ejaculations of negative dialectics in the faces of my fellow scholars and the backs of our erstwhile preceptors.

It was much to my relief, that with the necessary immediacy I was thereafter accepted mid term by the august school, Collège Mademoiselle Lenormand, where I was able to finish my studies and exorcise the geist of those ghastly Teutons from my previous school.

Chateau Comme il Faut. Sadly, the hospitality of the Chateau has been withdrawn from me owing to certain unfortunate misapphrensions on the part of the priggish dullards resident there.

I proudly show the seal of my good mother, as I choose to append her name to mine, instead of that most tedious peer who sired me.

Wards? Thank you kind sir. Your deft humour has elevated the day’s mood quite. 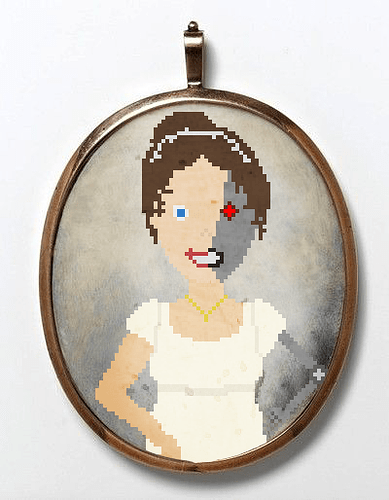 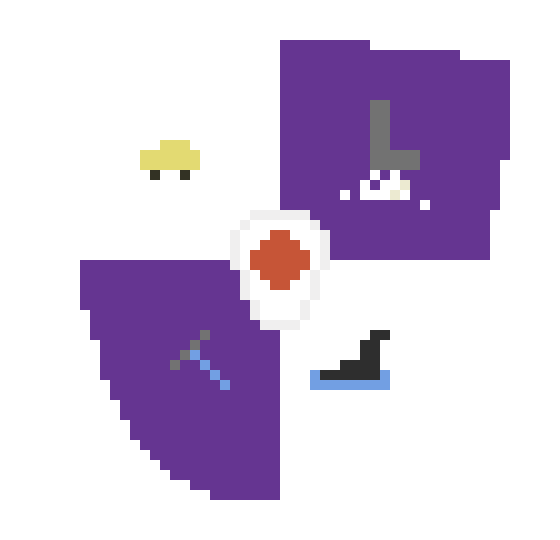 I cannot be quite so far imposed on! 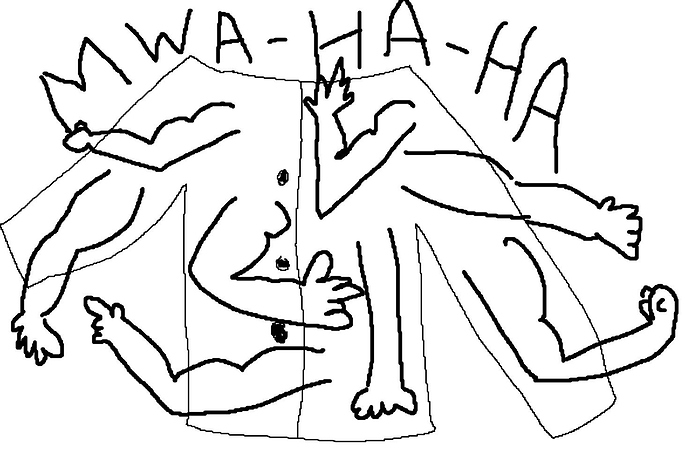 I must remember to take more care against cross-contamination when attempting bio-sartorial engineering.

I feel the cold fusing. By any chance, would your family be holding substantial palladium reserves? I have a cousin who is helping an entity that needs to secure and discreet source

Transmutation of metals is one of my many areas of expertise. I am currently able to turn gold into palladium at a ratio of 4 and 16/17ths to 1. I am quite certain I could improve this yield with a small investment of capital. If your particular friend were interested, I could have some papers sent around, say, tomorrow afternoon?

As a duly appointed representative of the Harcourt Historical Society, it is my distinct pleasure to inform you that you have been approved for inclusion in the first edition of Harcourt’s Handbook to the Titled, Landed, and Official Classes of the Weatherby System."

“I am further pleased to inform you that the membership has completed a second round of voting and each of you have been elected to Leviathan’s as a full member."

"I invite each you to pay a visit to the club at your earliest convenience. Assuming you have not already done so, naturally.”

Harcourts? That really is for Tyros, Noveaus, and Provincials. We all know the tome that matters: 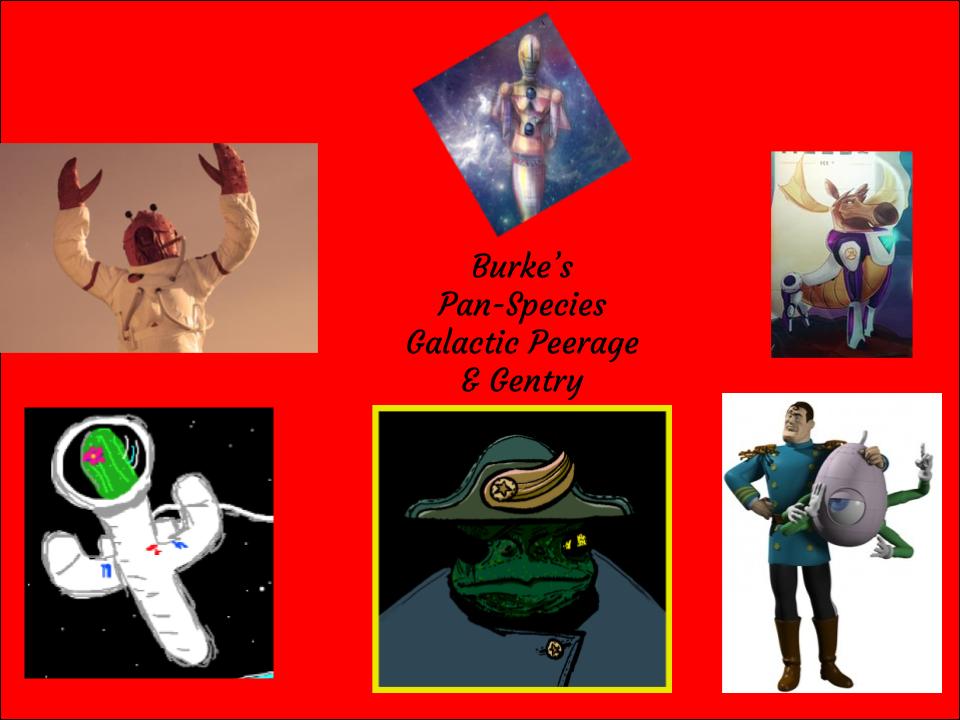 Still, one could do worse than Harcourts. We must all start somewhere.