Baking adventures continue: I made my first batch of bialys yesterday. 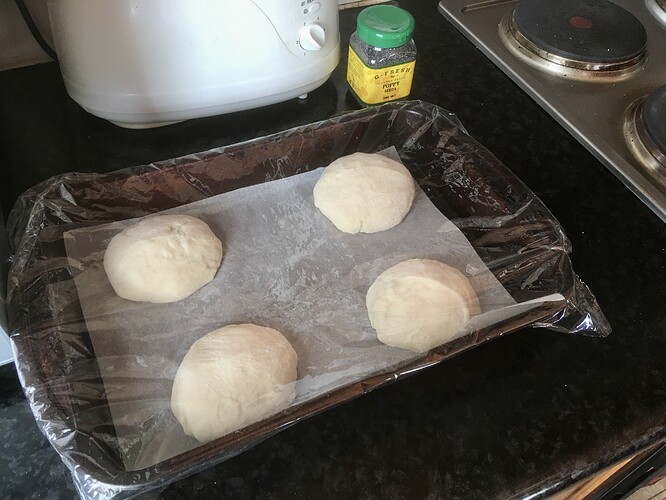 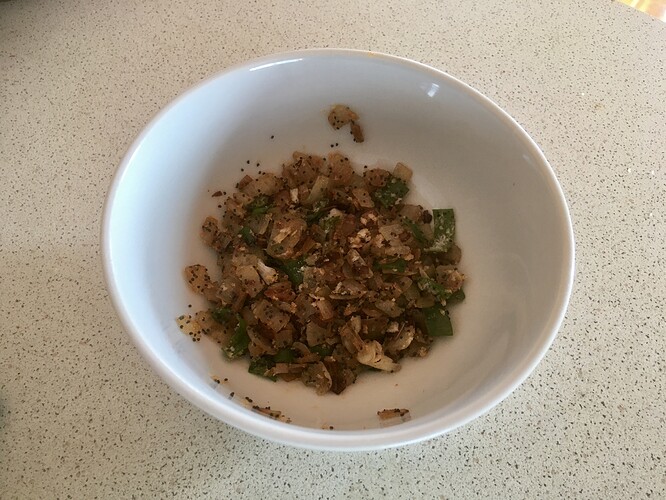 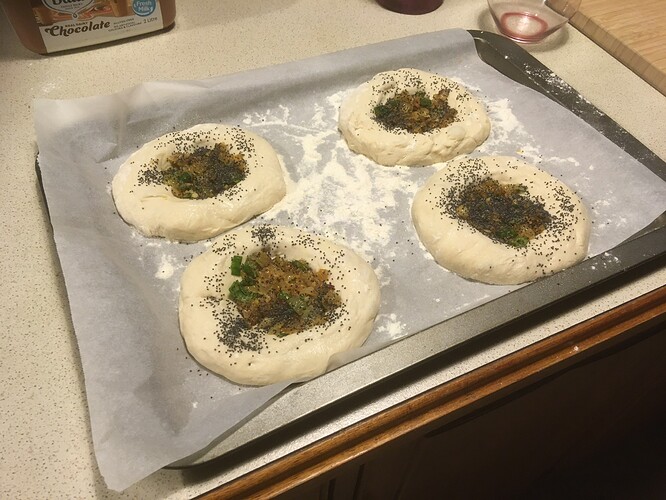 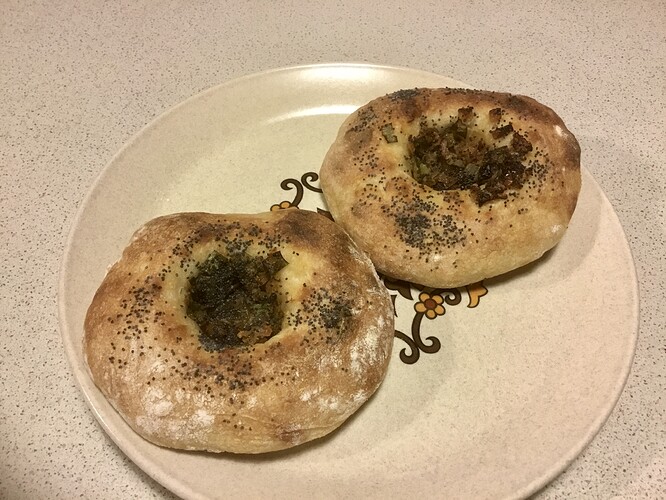 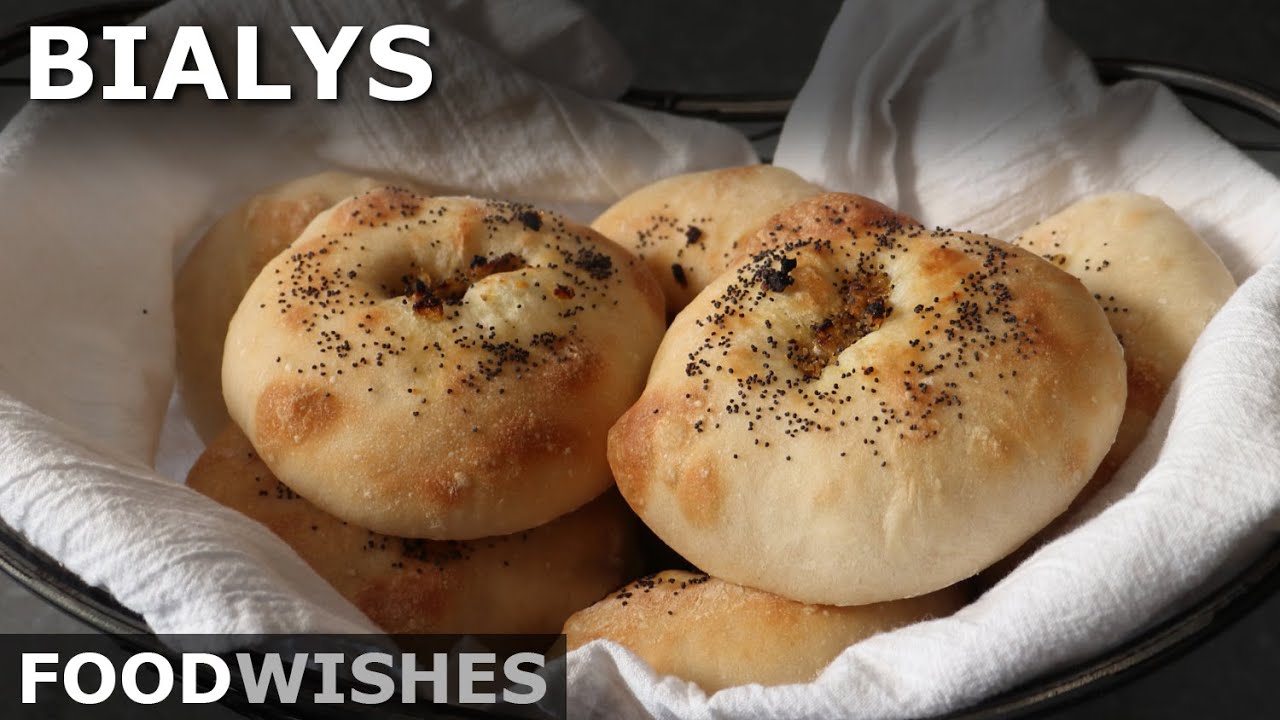 That was the first thing I thought of, and I figured they were named after the town.

Great idea. I feel like we had a recipe thread a while back but I am definitely up for more food conversations.

I think it was What’s Cooking?

I have no idea if this stuff is available overseas, but it’s worth trying if you can find it:

They mean it with the “crumbly” thing. Wonderful texture. 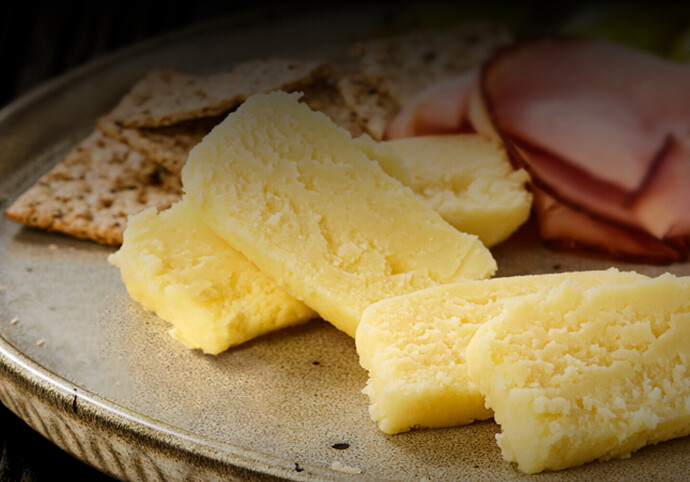 Owned by a multinational megacorp these days, but originally from around Devonport. 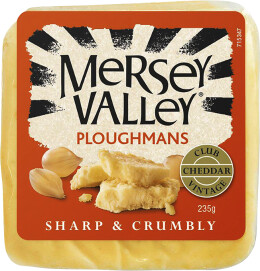 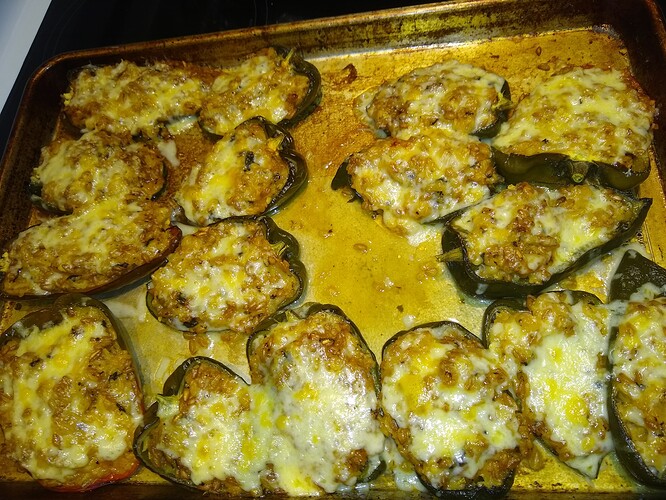 Made a filling of sautéed onions and garlic, then added some rice and tomato paste and chicken stock, added faro a bit later and cooked ‘til tender. Stirred in some cheeses and filled the peppers.
Roasted them with a tinfoil tent and more broth poured in the pan, then removed the tent, added some cheese and broiled to finish.
They came out quite toothsome. Yum!

I didn’t take pictures, but I want to tell about how I used up stuffing leftovers.

In my family we do Thanksgiving early, so folks (mostly me) don’t have to travel during the nightmare travel week, and to land around my niece’s birthday. So, we’ve had our Thanksgiving already.

It was mostly paella and sides, not traditional, but my sister wanted stuffing. She made it out of sourdough bread, with many spices and onions. It was really good, but there was a lot of it.

After eating it as a side for a couple meals, I was tired of stuffing, and looking for a way to use it up.

I toasted the stuffing to dry it out, then crushed it up and used it as the breadcrumbs part of meatballs. Basically it was ground beef, the toasted stuffing, and an egg. Those were baked (roasted?) in an air fryer.

They were dang good meatballs, and well seasoned despite me not adding anything beyond those three starting ingredients.

I can see that. With leftover ground turkey.

I don’t know what if I’d eat it, though.

Since we didn’t have a turkey (literally zero members of my family are fans of turkey) so it was regular ground beef, making nice (and pretty normal) meatballs. I know they were good on a sandwich with red sauce, and also on a sandwich with pickles and veg (but no sauce). 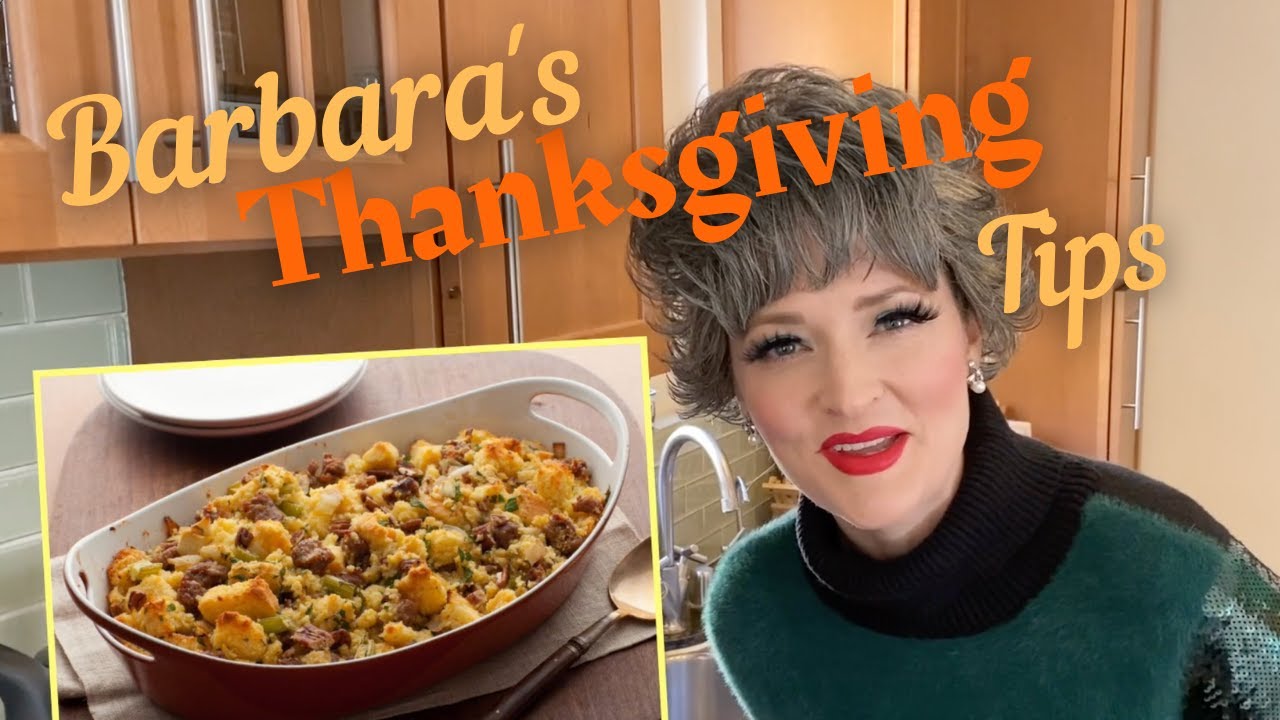 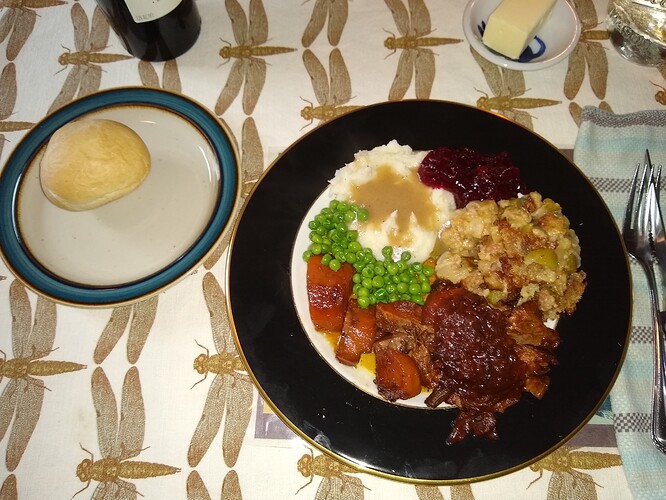 We did brisket instead of turkey, mashed taters with gravy and peas, cranberry sauce, sweet potatoes with a bourbon glaze, and stuffing.
Yum!
And since the pandemic started we’ve been a lot better about buying from local farmers, so everything except the bourbon and brown sugar is from within about 50 miles of us. Feeling pretty thankful for the bounty around us.
Happy Thanksgiving, everyone!

There is quite a bit of Carpobrotus (AKA pigface) growing on my land, and I’ve recently discovered that it’s edible. 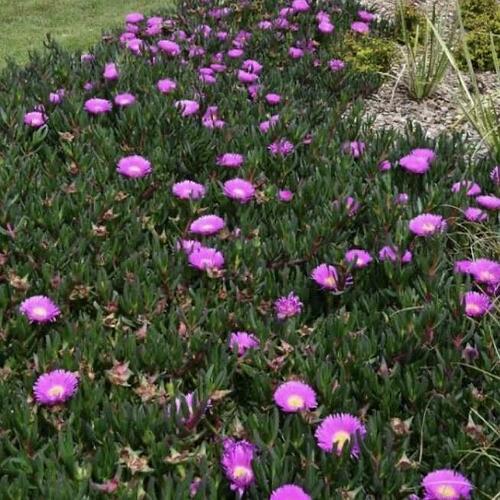 The juicy side of a salty fruit

Pigface is a salty-sweet fruit. Don't let its name deter you, it's all kinds of delicious.

I’m still waiting for the fruit to return, but the leaves are good food, too. Kinda reminiscent of a salty green apple (without much sweetness, more in texture and tartness) when eaten raw; I’m yet to try them cooked.

Many, many years ago I had pasta at a Mediterranean restaurant. It was what I can only describe as a tubular spaghetti. It was like spaghetti but… more.

Now, after all these years I have finally found some for sale. It’s named “Perciatelli,” which I can only pronounce as percocetti.

We’ve been getting Bucatini lately, which sounds similar.
Cacio e Pepe is a really good recipe with that, hearty.

There was a shortage earlier in the pandemic, and I think it was suspected that they were getting bought up to use as straws by businesses, after plastic straw bans went into effect. No idea if that was true, but kind of funny.

Just made another batch of bialys for breakfast/general snackage tomorrow: 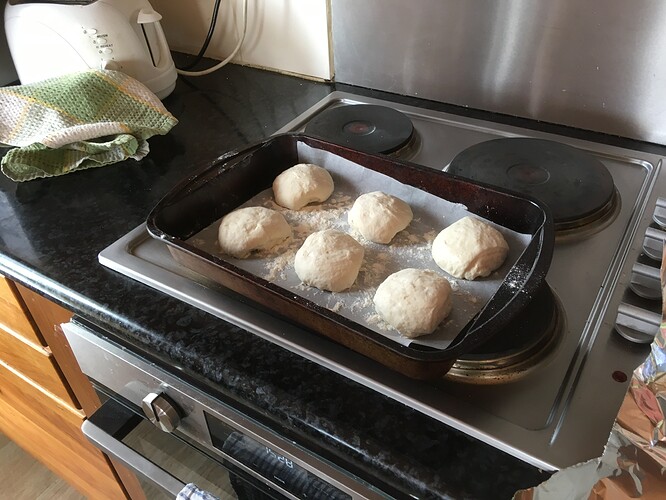 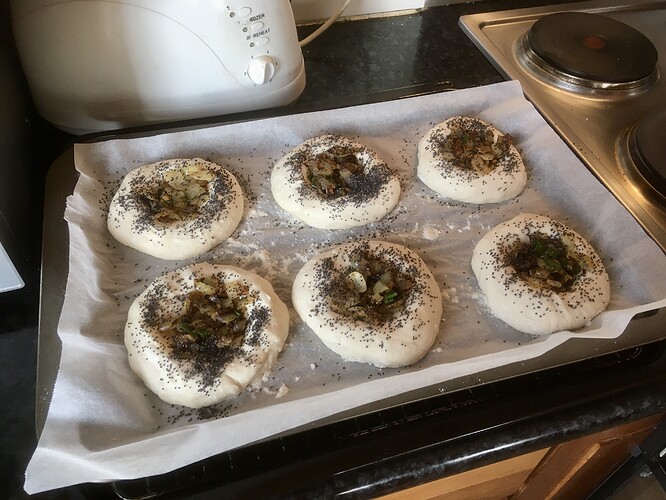 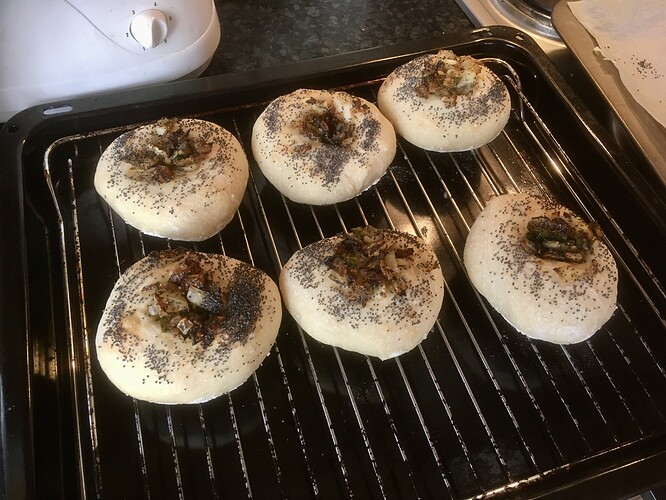 I should get around to experimenting with different fillings, but the poppyseed/caramelised onion is just too nice.

Tomorrow afternoon I plan on baking these: 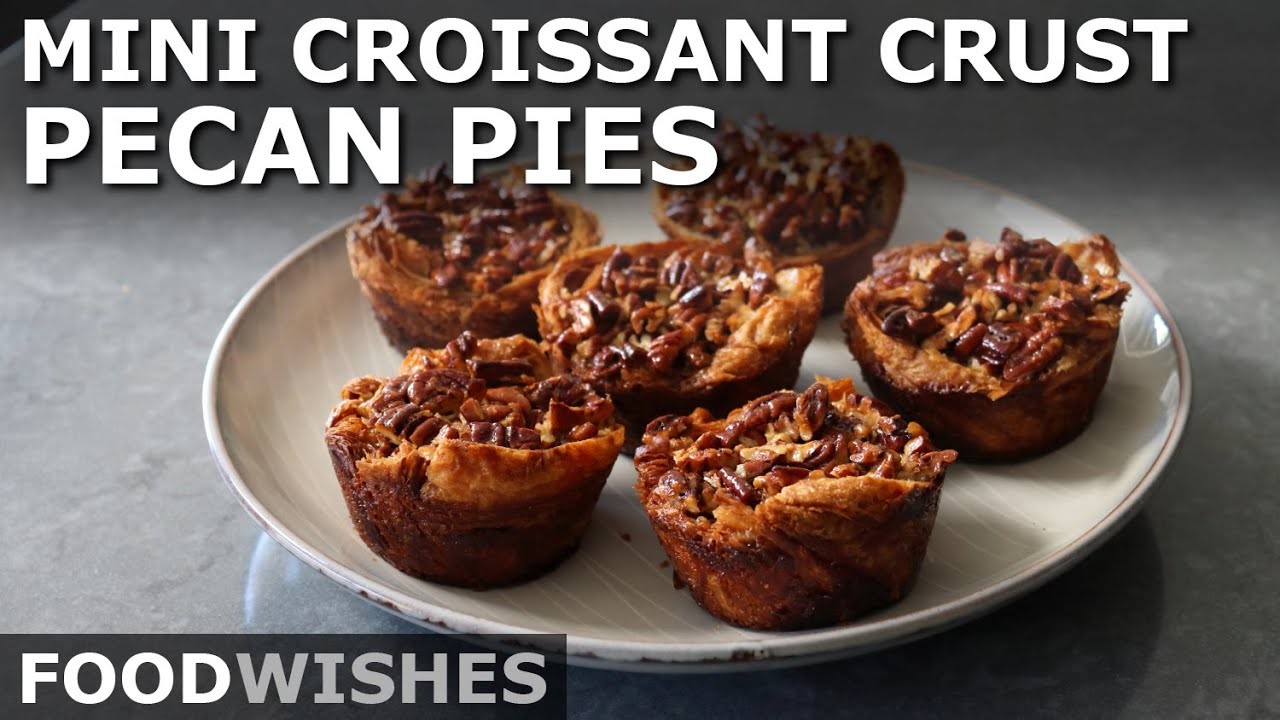 Tomorrow afternoon I plan on baking these: 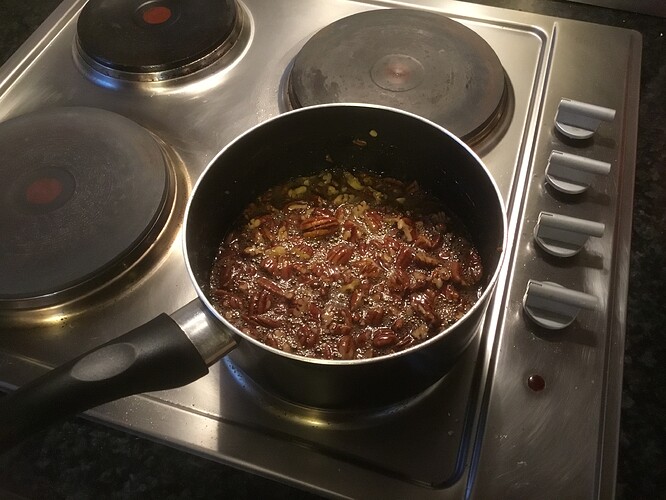 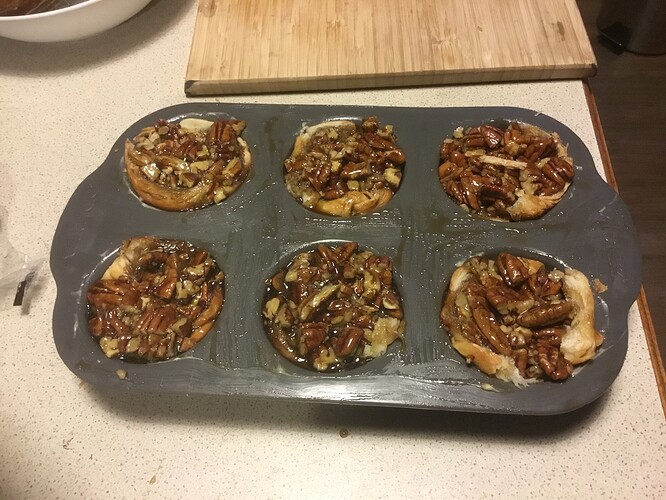 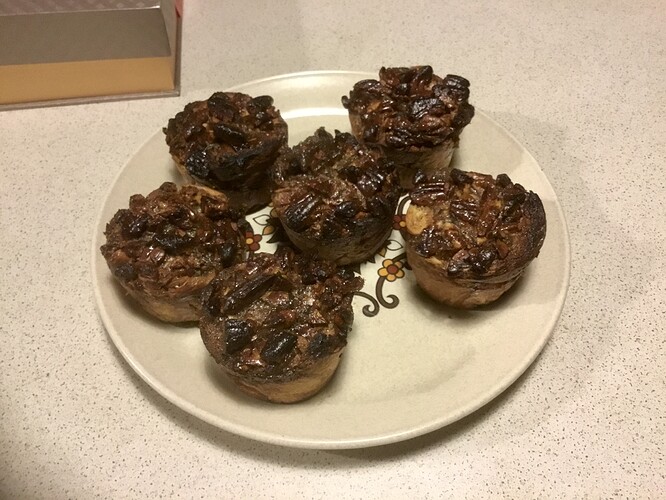 Perfect for your Thanksgiving dessert table, these mini pecan pies have a crisp, flaky, buttery crust with a baklava-like texture... made with store-bought croissants!

Exceptionally easy to make. The only tricky part is getting them out of the pan intact without burning your fingers. 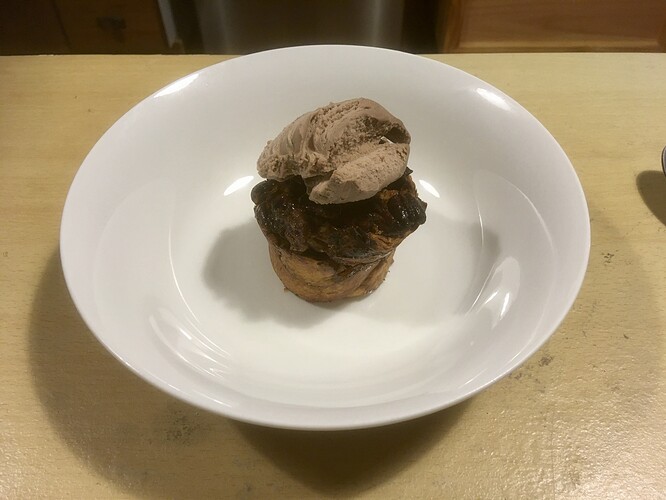 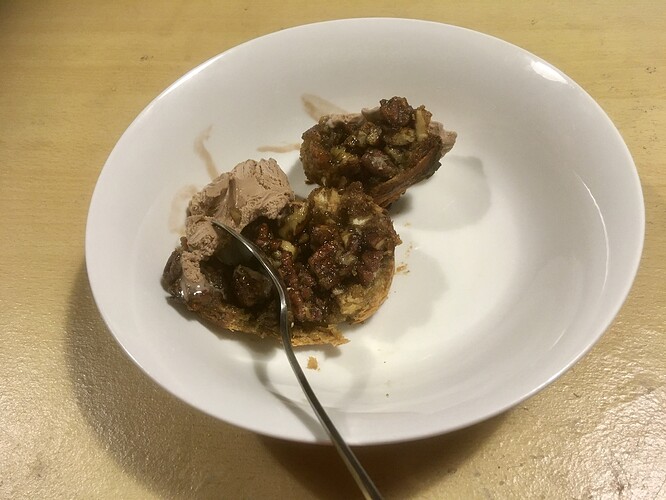 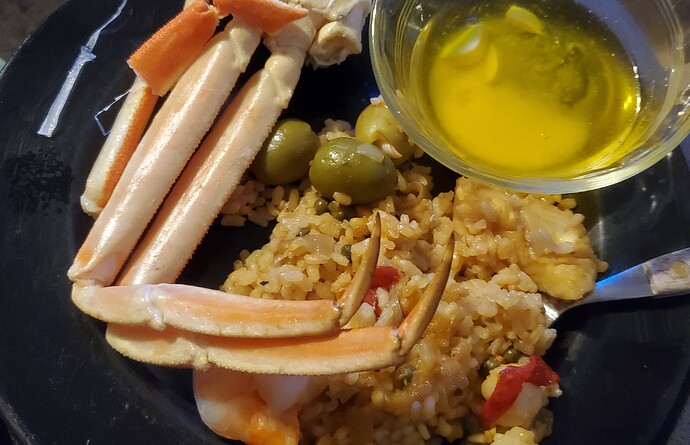 Paella and crab legs for Christmas dinner, not that there was anything else Christmasy about anything but it’s a yearly excuse for a paella tradition.

I love paella. That’s a great tradition. We made a delicious turkey and a few nice sides.

Food photography from the past. On the left, from “All About Home Baking”, from General Foods, 1933; on the right, from “The Betty Crocker Cookbook”, from General Mills, 1985. 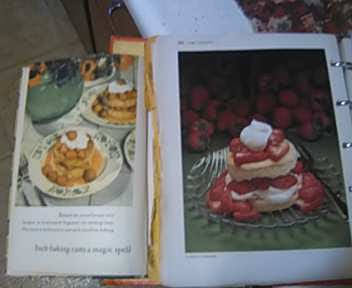