In @waetherman’s absence, we shall soldier on.

Round 1 (despite the title)

I’m starting a new thread because the previous thread What’s In a Name is now at 200+ responses and might be a bit daunting to sift through. A new thread will allow us to focus on the discussion of the current names proposed. Below is a multiple choice poll that includes every name that has been suggested, in a format that has been verified to be available. Please pick as many as you like, but don’t just click everything. This is intended to be a first-round filter. I’m going to sift through th…

Polls have been open for almost a week and nobody new has voted in the last few days, so I’m closing the first round and opening round 2. For the next round, I’ve culled the list down to 16 names. Why 16? Because it’s hexadecimal. Because of the Law of Fives (6-1=5). Because there were 16 names that got at least 10 votes each, and 10 is a nice round number. And 10 is 16 in hex. See, it all comes around, right? Anyway, back to the poll. I suspect this will be the penultimate round, but again we…

My apologies for my prolonged absence in the midst of this important project. I could go on with excuses, but that would be a waste of pixels. Suffice to say I’m back, and I’m committed to moving this all forward. So, with that said, after much gnashing of teeth, I’ve decided to cut the list to 8 names from the 16 that were in the previous round. Why 8? Because it’s one byte, and one byte can’t hurt you. Because of the Law of Fives (8=5+3, 5x3=15, 15=1x5). Because nine is too many, and seven c…

This is round four, and it’s fitting that we have four names remaining:

Please keep in mind that in the previous poll, you were allowed to choose two. This time, you have but only one vote to give, although we’ll still have one more round with the final two, and then a round to choose a TLD to go with the final choice. We’ll run this poll for two weeks, or until everyone has voted, whichever comes last first.

I’m sticking with Adhocracy but I’m mainly at the point where I want to get this settled.

Do we really need another round with the final two? I’d prefer to take this as the final round, especially if there’s a clear winner, and then a quick vote on TLDs.

Well, if (the collective) you would finally pick the right name, then we could get on with it.

Seriously though, if there is a clear enough winner, I’d be OK with skipping the final naming round and moving on to the TLD round. I’m open for discussion either way, but I’m reluctant to put it to a vote.

Then we get to figure out the TLD!!!

I’m beginning to think “arewethereyet” is the right name for this place!

I’m beginning to think “arewethereyet” is the right name for this place!

Wow, arewethereyet works on so many levels! I think we should restart the whole voting process so that we can include it. Perhaps we could form a subcommittee or five to make sure the voting goes smoothly…?

Ooo! And a pre-planning committee to draft the guidelines for the naming election committee to-

…which makes The Other Place “if you don’t quit yer bellyachin’, I’m gonna turn this blog around and go home!”

Can I change my vote to this?

Ooo! And a pre-planning committee to draft the guidelines for the naming election committee to-

All I hear is the whisperings of sweet nothings into my ear.

Then we get to figure out the TLD!!! 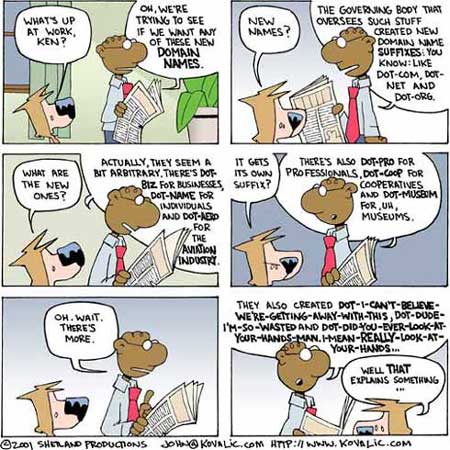 As of today, 51 voters. How many registered users on the site now?

According to https://bbs.elsewhere.cafe/about, 139 total users.
(And 90 active in the last seven days - which isn’t what you’re asking, but is a useful indicator.)

And of course @LockeCJ posted some useful stats here:

(TLDR: We got 138 users, but from the data culled above, I believe that 90 (or so) is the reasonable maximum number we can expect to see this vote, so while 79%-68% of our daily turnover have voted (which is good), 51/90 is the inclusive ratio to measure against: 61% of our 90 ‘reasonable maximum’ users have voted. Please do check my arithmetic and assumptions.)

[Edit for honesty: if we used the 30 day max, instead of the 7 day one, the voting percentage is (currently) 47%. I’d be happier with not waiting until we get a ‘30 day average’ of votes, though.]

…aaaand I’m going to stop running figures, and wait for someone else to check my assumptions.

Maybe let’s run this for a specific amount of time - say a week, then close voting?

We’ll run this poll for two weeks, or until everyone has voted, whichever comes last first.